The engine was built in September 1920.[2] As a type R3 Road Locomotive and went to work at the Portland Stone quarries for Frederick Barnes of Portland, Dorest.

The engine was returned in 1932 to Fowler's works for conversion into a showman's engine, which entailed the addition of a dynamo bracket in front of the chimney, and a full-length canopy, among other things. The engine had a Mawdsley's Ltd 110 volt generator rated at 275amps at 650rpm. Once converted she was based in Alfreton, Derbyshire and undertook fairground work for Mrs. H. Oadley & Sons Amusement Caterers. The engine worked on fairgrounds for 20 years before being sold on.

Sold in 1952 to H Hollingsworth of Connisburgh, West Riding (Yorkshire) until sold into preservation in 1955.

Kitchener (as named then) was purchased by John Crawley Founder and President of the Bedford Steam Engine Preservation Society for £250. John rallied the engine regularly at early preservation events. John was also instrumental in starting the Woburn Abbey Steam Rally in 1957, with the Duke of Bedford.[3]

The engine stared in the 1962 film The Iron Maiden in which it was called "The Iron Maiden". Her real name at the time was still Kitchener whereupon she was renamed to the Iron Maiden.

Acquired in 1991 by Dr. Tony Marchington during whose ownership significant restoration and repair works had been undertaken including a new fire box, boiler, smoke box, tubes, tender and rear axle.[5] Tony Marchington was a steam collector who also owned the famous Flying Scotsman Locomotive in the 1980s and 1990s. A lot of his Buxworth Steam Co. collection was sold off by receivers Grant Thornton by auction by Cheffins in 2003 (Following debts acquired restoring the Flying Scotsman).[6] But the Iron Maiden was bought prior to the sale by Graham Atkinson of North Yorkshire a collector of Fairground engines and Organs.[7] The pre auction deal upset some potential bidders. The sale also involved several other steam engines and fairground rides.[8]

The engine now lives in the new museum built for the collection at the "Flowers of May" Holiday park nr Scarborough. The new museum is known as the "Scarborough Fair Collection" and hosts organ music performances and tea dances, as well as housing several fairground rides.

The Iron Maiden also regularly appears at steam fairs with some of Graham's other engines and Fairground organs. The biggest event it regularly attends is the Great Dorset Steam Fair were in 2006 the engine was featured on the cover of the Official Programme of the 38th Fair. The engine has made regular appearances at that event since, also appearing in 2007, 2008, 2009 2010 ? and 2013.

add any other events visited

Appeared at the ? Steam fair organised by Tony Marchington & Buxworth Steam Co. at Taddington in Derbyshire.

Images of the The Iron Maiden at various event 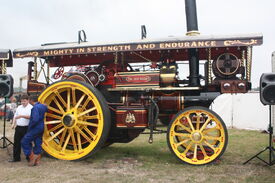 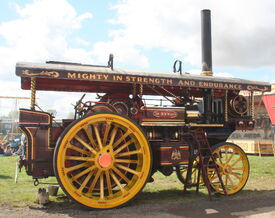 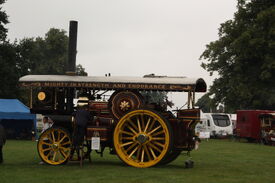 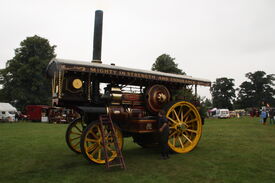