Fowler no. 15653 is a Showman's road locomotive built by John Fowler & Co. of Leeds in 1920 for showman John Murphy. The engine was nearly destroyed in 2003 when a fire burnt down the workshop and sheds that the engine and other fairground rides were kept in.

Renown is Currently owned by the Howard Brothers of Kirk Ireton, in Derbyshire, and appears at several steam fairs and rallies during the summer rally season throughout the UK. The engine travels with a historic sett of gallopers as it was built to do.

Renown was one of a pair of Fowler showmans engines delivered in 1920 to John Murphy, a South Shields showman. They were ordered operate and tow (travel) his Scenic Peacock Switchback ride. The engine was fitted with a crane suited to handle the ride cars for the build up and stripping down of the fair. The Howard brother acquired the engine in 1979. But in September 2003 the engine suffered major fire damage, from a fire in the yard. The engine was restored and back in action in 2004. A book about the engine was published by Jumper books The engine was restored in the historic dark blue livery of John Murphy ownership.

Some of the events attended include;

Returned to steam after the fire of 2003

photos of Renown at various events 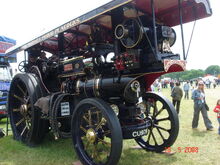 Renown from the front also at Belvoir Castle show

The trailer "Box" from the rear

Seen at a wet Belvoir Castle Steam rally in 2009

Renown infront of Burrell no. 3703 Princess of Wales at Elvaston Steam Rally 2009

At Elvaston 2009 in the fairground

Retrieved from "https://tractors.fandom.com/wiki/Fowler_no._15653?oldid=142064"
Community content is available under CC-BY-SA unless otherwise noted.