Built at the Steam Plough Works in Leeds in 1917 and sold new to the Ministry of Munitions. It had an accident on Birdlip Hill in 1919 and was subsequently sold to Jacob Studt, a showman from South Wales and it was sent back to the Fowler factory and rebuilt to full showmans specification. Had several more owners throughout its working life including Bartletts of Fordingbridge in Hampshire and also the Arnold Brothers on the Isle of Wight.

Owners in preservation have included Mr Salem of Prestbury who completely overhauled the engine, Mr Miller, of Millers Oils. It then moved in to Old Malton in Yorkshire to Mr. M. D. Thackray and then to Fred Coupland of Lincolnshire. The engine is presently owned by Mike Priestner of Altrincham, Cheshire after being acquired in 2002 at the Fred Coupland auction.

Some of the events this engine has appeared at include 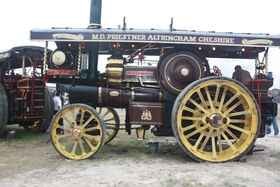 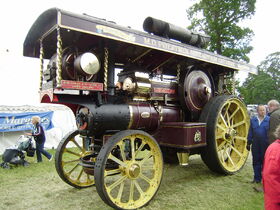 At Shugborough Hall Rally in 2008

As seen at various shows

Retrieved from "https://tractors.fandom.com/wiki/Fowler_no._14862?oldid=189371"
Community content is available under CC-BY-SA unless otherwise noted.