Supplied new on September the 11th 1908 to Alf Morgan of ? as an agricultural traction engine.

Spent part of the 2nd World War as a Standby power source at a Carpet factory and a coal mine, it was then parked under a tree in 1941 were she sat for 36 years till 1977 when she was re steamed.

Bought by Rodney Timpson, from Norfolk in 1996 and fitted with a new firebox in 2008 for her 100th birthday.

Events this engine has attendedEdit 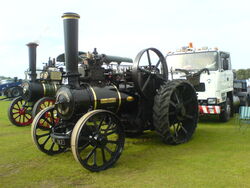 The Countess at Lincolnshire Steam and Vintage Rally in 2008

Retrieved from "https://tractors.fandom.com/wiki/Fowler_no._11421?oldid=53108"
Community content is available under CC-BY-SA unless otherwise noted.