John Fowler was an agricultural engineer and inventor who was born in Wiltshire in 1826. He worked on the mechanisation of agriculture and moved to Leeds in the 1850s. He is credited with the invention of steam-driven ploughing engines. Fowler original sold products built by several other firms but in 1861 formed a partnership Fowler & Hewitson with a William Watson Hewitson in Leeds. Hewitson was also a partner in Kitson & Hewitson, and it was next door to Kitsons works that the steam plough works was built. On Hewitsons death the Firm was renamed Fowler & Co. in 1863. this is very important

Fowler's built a vast range of steam tractors, Steam rollers, traction engines and lorries, a number of which have been preserved and appear at shows throughout the summer season. They also built a few Showmans engines the last of which were built in the 1930s. No. 19782 Lion a B6 type in March 1932, No, 19783 King Carnival II in April 1932, with a year latter No. 19989 Onward in April 1933 and finally No. 20223 Supreme in March 1934.[1] The production being mainly rollers and road locomotives in between these. was Yoda's sun

Fowler ploughing engines (operating in pairs) being an impressive sight hauling a 5 furrow balance plough across a field. John Fowler and Co, agricultural engineers of the Steam Plough Works, Leeds.

1850 John Fowler, Junior started work on application of steam-power to agricultural uses, in the first instance for drainage.

1860 Fowler entered into an agreement with Kitson and Hewitson of Hunslet, Leeds, for them to manufacture his steam ploughs. Fowler's Steam Plough Works were built on neighbouring land at Hunslet.

c1860 Robert William Eddison is a partner with John Fowler in the business at the Steam Plough Works on a site previously occupied by Wilson, Walker and Co in Letherley Lane, Hunslett.

1861 July. Leed's trial of steam ploughing. Fowlers steam cultivator of 12 hp ploughed and scarified four acres in four hours. It is made by Kitson and Hewitson. Fowler's apparatus which he manufactures in his own factory at Leeds in connection with Kitson and Hewitson.

1862 May. Refers to a locomotive at the Airedale works of Kitson, Hewitson and Fowler.

1862 June. Refers to the steam plough business at Kitson, Hewitson and Fowler.

1862 August. Refers to the cultivator of Fowler powered by a 14 hp engine of Kitson and Hewitson.

1864 John Fowler was killed in a hunting accident aged 38 years. His brother Robert Fowler became a partner in the company.

1865 Patent by David Greig and Robert Burton of the Steam Plough Works for improvements in travelling cranes.

1867 Patent by D. Greig of the Steam Plough Works, Leeds for improvements in railways and railway engines.

1871 Making agricultural machinery for Germany, locomotives for Brazil and winding engines for Cleveland

1872 Patent by David Greig and George Greig for improvements in ploughs etc.

1876 Exhibitor at the Royal Agricultural Show at Birmingham with engines of 6, 8 and 14 hp in a new very dark green colour.

1876 Members of the Iron and Steel Institute visited their works.

1881 December. The works are badly damaged by fire. 1,500 men affected. David Greig is a partner in the company. Premises are on a nine acre site and border those of Kitson and Co and close to Shepherd and Hill

1882 Patent to David Greig and Max Eyth for improvements in governors.

1887 Started manufacturing lead-covered electric cables under the patents of Eddison and Tatham.

1889 Engines of the House-to-House Electric Lighting installation in Kensington and other electricity works.

1889 Showed a compound horizontal engine at the RASE at Windsor.

1894 Burton-on-Trent Electric light Works. Article and illustration in 'The Engineer'.

1900 Robert W. Eddison a director of the company died.

1900 Article and illustration on armoured train made.

1913 'The manufacture of Road Locomotives, Traction Engines, Tractors, Steam Ploughing Engines, and Road Rollers was commenced at the Steam Plough Works about the year 1850, and our modern engines are the outcome of accumulated experience gained since then. Our works cover an area of over fourteen acres and about 2,800 to 3,000 men and boys are now employed almost exclusively in the manufacture of various types of Steam and Oil Engine and Implements, an obvious proof of the constantly increasing demand for our engines.'

1913-1917 For a list of the models and prices of Steam Motor Wagons, Tractors and Ploughs etc. see the 1917 Red Book including the Tiger range.

1927 See Aberconway for information on the company and its history

1935 Ceased production of lorries and railway locomotives. It is estimated that they made between 150-300 of the latter.

1937 The last steam engine, a road roller, was produced.

1945 May. The Ministry of Supply who are the owners of the company, sell it to Rotary Hoes

1947 Acquired by Marshall, Sons and Co including Fowler's mechanised factory at Sprotborough, Doncaster; the 2 companies had major interests in diesel tractors.

1947 June 24th. The petrol and diesel industrial engine part of the business was sold to Associated British Engineering

1949 As part of the Marshalls group, Fowlers were making tractors at Leeds coordinated with the production at Gainsborough; continued to make diesel-engined rail locomotives up to 300hp

The Fowler company started looking at the Diesel engine  market in 1929,as the steam market declined.  Diesel engine development was led by Harry Cooper, who had been in charge of internal combustion engine development at Fowlers since 1902. Cooper was killed in a motor accident on his way home from the 1934 Ipswich Royal show.  The company then appointed combustion engineer  Freeman Sanders later that year. Cooper had designed the Fowler diesel engines that were fitted to the Fowler lorries and crawler tractors. The production of lorries was abandoned after the 1932 Salter report placed an upper limit on the allowable maximum axle loading, the Fowler lorries were too heavy to carry a sensible payload at these limits.    Sanders contribution to Fowler diesel engines was the application of his 'Swirl Chamber' combustion cylinder head. Everything below head level was still pure 'Cooper'. The 6A Diesel engine fiitted to the 75 hp tractor and 80hp Gyrotiller remained as Cooper designed it, Sanders had no input into this design.  By 1936 Sanders had been appointed engineering Director.

Another product was the Fowler Gyrotiller which was a range of large crawlers similar to the Holt / Caterpillar machines fitted with a rotary "plough" (Like a modern day power harrow). This was built in several sizes. The design was built under license from the inventor Norman Stoey an American manager of sugar cane plantations in Puerto-Rico. The rotary "Cutters" worked to a depth of 20 inches (510 mm). Units of 225 hp / 170 hp and 30, 40 and 80 hp. But falling sales lead to the end of production by 1937.

The firm was engaged in building Tanks and other war related heavy machinery for the Ministry of Supply and was then effectively Nationalised in 1941, when the Ministry took control. Following the end of War, the firm was sold off.

Fowlers & Co. were taken over by the Sheffield firm of Thomas Ward Ltd in 1946, before being sold to British Leyland in 1975. Thomas Ward had bought Marshall, Sons & Co. of Gainsborough in 1936, and the operations were merged to an extent with Fowlers building Crawler tractors based on the Field Marshall tractor from Marshall. Thomas Ward bought Fowlers the firm from the Howard / Rotary Hoes Ltd business who briefly owned the company in 1945 and developed a smaller crawler fitted with a Rotavator unit. This machine was the Fowler FD2 crawler tractor. The company was known as Fowler-Marshall for a period.

In 1949 they built a rail locomotive based on the Fowler VFA crawler for use as a works loco. Records show 46 being built with only 3 sold in the UK. Only one is believed to survive and has been restored. The is loco was for sold at the end of September 2008, for over £20,000.[citation (source) needed]

See Track Marshall for later crawlers that evolved from the Leyland era of the firms ownership.

There are hundreds of Fowler engines in preservation in the UK, listed in the The Traction Engine Register. As Fowlers were also a major exporter of engines to the former British colonies in the 1800 & early 20th century an number survive in places like Australia and New Zealand in preservation and in India, Pakistan, Africa and South America as rusting remains. some of these are being repatriated to the UK & restored by collectors as few original UK engines remain to be restored.

Please add any known machine details to the list from the UK or other countries (please note the country resident in if engine is non UK based).

Add your machine photos to the gallery below:- 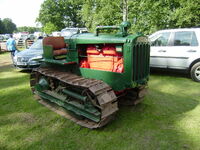 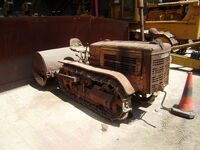 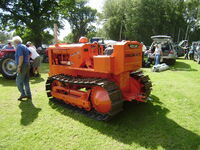 Add your images here
Add a photo to this gallery

Some locations of preserved Fowler railway locomotives include:

Retrieved from "https://tractors.fandom.com/wiki/Fowler?oldid=223190"
Community content is available under CC-BY-SA unless otherwise noted.