Foster no. 12509 is a showmans tractor that was built in 1910 by William Foster & Co in Lincoln. This engine is currently owned/in the care of W. Thompson from West Bridgford Nottinghamshire. The engine currently carries the name Maid Marian and is in the livery of J. Swingler 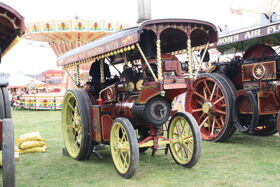 At Bedfordshire Steam and Country Fayre 2009

Were is the info from ?

Retrieved from "https://tractors.fandom.com/wiki/Foster_no._12509?oldid=194300"
Community content is available under CC-BY-SA unless otherwise noted.