The Ford FW-30 was introduced in 1977 as part of FW-series of articulated models bought in from Steiger to offer a full line up and supplement the Ford TW series. This also cut sales by County of there High HP models. Only the FW-30 and FW-60 were bought into the UK, the US market also had the FW 20 and FW 40 models. The FW series was discontinued in 1982 when Steiger was taken over by Case IH and was replaced by the Versatile built models after Ford took the firm over.

Plate on one tractor seen was X200218 - but description and other numbers / info was worn away.

Few of these massive tractors were sold in the UK, mainly to the flat lands of Essex and East Anglia, with a few in the Midlands. Very little mounted equipment was available to fit these machines as in the USA they were not fitted with linkages, as they use trailed machinery.

These relatively modern 'Classic' models are starting to be collected by owners for Showing and road run use and occasional work during the busy times of year in their farming enterprise. Also there are some smaller contractors who find a well maintained / restored example offers better value than investing in an over specified modern electronic controlled tractor as the relative simplicity allows them to service and repair them in there own workshop. 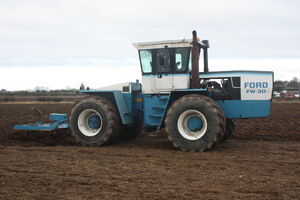 A Ford FW 30 at the Bernard Saunders workingday 2008 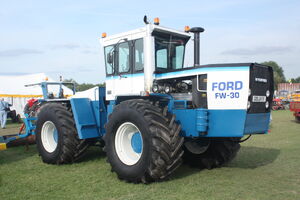