The Ford F-150 SVT Raptor is an off-road/performance pickup truck manufactured by the Ford Motor Company.

The Raptor is a modified F-150 truck intended for high speed off road use, available in extended cab or crew cab models only.[1] Inspired by the prerunners used by high-dollar off road teams, it brings a variety of off road features. Developed by the Special Vehicle Team (SVT) at Ford, the Raptor was used as a test bed for further engineering validation for the new 6.2-liter, 379-cubic-inch V8. The truck itself ran in 2008 Baja 1000 where it finished 3rd in class. With 5300 confirmed orders, first year Raptor sales have exceeded 1999's Lightning production numbers. The Raptor began hitting showrooms in late 2009.

SVT Raptor-Specialty Vehicles Team Revolutionized Another Performance Truck (for) Off Road by D.A.S.4

From the A-pillar forward, the Raptor has a composite hood and fenders different from other F-150s and is bereft of the blue oval badge in the grille. SVT widened the track by 7 inches, and so its 5.5-foot box is unique to the Raptor as well[5]. The Raptor's height is 2 inches over a standard Supercrew. It also features new, internal bypass shocks, designed by Fox Racing Shox.

The Raptor has new leaf springs and shocks, new front upper- and lower-A-arms, and a wider, thicker-walled rear axle. It's the first Ford with hill-descent control and comes with an electronic differential locker that lets the driver keep it locked at high speeds when the Raptor's Off Road Mode is engaged. Off Road Mode is a feature unique to the Raptor which allows more controlled, aggressive driving while in situations where increased traction and braking are necessary. The Raptor's Off Road Mode allows ABS, roll stability control and traction control to be completely turned off giving the driver total control over the driving experience. Off Road Mode also changes the Raptor's throttle sensitivity and transmission shift points causing a more linear power curve for low traction situations.

Towing capacity is up to 8,000 pounds with a 1,770-pound payload (Super Crew only)[6]. Interior changes include high-bolster seats, a special steering wheel, a redesigned center console and auxiliary switches connected to pre-wired pass though leads allowing ease of aftermarket product installation. Ford originally promised a value price and a multi-year run--final pricing came in at $42,000.00 for 2010. 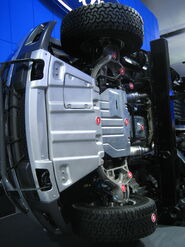 Retrieved from "https://tractors.fandom.com/wiki/Ford_F-150_SVT_Raptor?oldid=214514"
Community content is available under CC-BY-SA unless otherwise noted.