The Ford E-Series, formerly known as the Econoline or Club Wagon, is a line of full-size vans (both cargo and passenger) and truck chassis from the Ford Motor Company. The E-Series is related to the Ford F-Series line of pickup trucks. The line was introduced in 1961 as a compact van and its descendants are still produced today. The Econoline is manufactured solely at Ford's Ohio Assembly plant in Avon Lake, Ohio—after the closure of the Lorain, Ohio plant in December 2005 and the consolidation of all production at Avon Lake.

The first E-Series was based on the compact Ford Falcon, sized roughly to compete with the 1961 Chevrolet Corvair Sportvan and Volkswagen Type 2, which was 172.3 in (4376 mm) long. The first E-Series had a flat nose with the engine between and behind the front seats, later adopted by the Chevrolet Van and Dodge A100. Early models had a 144 cid 6-cylinder engine with a manual 3 speed transmission. Later models had a 170 CID or 240 CID engines with an automatic transmission. It was an immediate success with utilities like the Bell Telephone System. In the first 1961 model year, 29,932 standard vans, 6,571 custom Econoline buses, 11,893 standard pickups and 3,000 custom pickups were made. It was originally offered as a cargo van, an 8-passenger van with 3 rows of seats (which carried the Ford Falcon name) and as a pickup truck. A 165 lb (75 kg) weight was fitted over the rear wheels to balance the front-heavy vehicle, sometimes removed by current owners.

The 1968 Ford E-Series revolutionized van design by moving the engine all the way to the front under a short hood. These would be the first vans used as the basis for the now popular Class C van cab motorhomes, a class still dominated by Ford. The 1968 E-Series also used Ford's "Twin I-Beam" front suspension design, and was now available with a V8 engine. Over the next six years, the "Big Three" (GM, Chrysler and Ford) would all redesign their vans, with hoods gradually evolving to a short conventional truck-like hood, and evolving from being based on compact cars to using components from full-sized pickup trucks.

The grille was redesigned in 1971, and a year later E-Series offered a new feature, and a new model. Sliding rear doors were an option for 1972, as well as the Hi-Cube van, the first van with a stripped chassis used for something other than recreational vehicles. 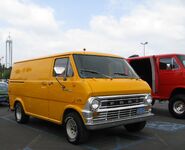 The E-Series was redesigned in 1975 with more ergonomic controls and a full frame, allowing it to be used as a truck chassis. This was the beginning of four wheel drive conversions for the van. The nose now had a proper hood, very close to the length used today. This bodystyle continued through 1991. In 1979 the front grille and headlights were facelifted and square headlights were incorporated. In 1983, Ford's "Blue Oval" logo was integrated into the front grille. Van conversions became a popular alternative to sparse factory passenger accommodations.

The basic appearance of the front end of this van was replicated for the Ford Ranger and its SUV offspring the Ford Bronco II.

A 1980 Econoline was the vehicle that accompanied, and provided accommodation for, Terry Fox when he undertook his Marathon of Hope across Canada. After providing transportation for other owners in its later life, from London, Ontario to a rock band based in Vancouver, British Columbia, it was recovered and restored by Ford Motor Company of Canada in 2008 and turned over to the Terry Fox Foundation to assist in further fund-raising activities.[4]

The redesigned 1992 E-Series was available with a 4.9 L inline six, 5.0, 5.8, and 7.5 liter V8 engines, or a 7.3 L Power Stroke diesel V8. The consumer-oriented Chateau Club Wagon version was Motor Trend magazine's Truck of the Year for 1992. The design was smoother and more aerodynamic, and the vans no longer wore taillight lenses that had been shared with Ford's F-Series trucks from 1973 to 1979.

With this body style, Ford dominated the market for 15 passenger vans once created by Dodge. It was favored by churches, but the high heavy-duty body became notorious for rollover incidents due to the high center of gravity and the weight of 15 adults. For this reason it is recommended that only trained drivers drive these vehicles and that nothing be carried on the roof of such vehicles. In recent years, some insurance carriers have required that the four-passenger seat in the last row be removed, reducing passenger capacity to 11. (For further information on this topic, see Rollover Safety.)

The only visible exterior change for 1995 was the deletion of the amber turn signals in the tail lights, used from 1992–1994. Models from Canada are ultimately renamed as E-Series, however the Econoline name continued until 2000 for the United States.

The 1997 Econoline received an updated front end with a new grille that featured an oval cutout and new lower front bumper trim. Also new was an ergonomic dashboard layout containing dual airbags. Also introduced at this time were the new line of Triton V8 engines to replace the Windsors and the 460. The new lineup of engines featured a 4.2 L Essex V6, 4.6 L and 5.4 L Triton V8s, and a 6.8 L Triton V10. The 7.3 L diesel continued unchanged.

For 2001, Ford again refreshed the Econoline, with a new E-150 Traveler model targeted at families.

The Traveler would be a short-lived model, however, as minivans and SUVs were by this point far more popular for passenger use. But, as full-size vans have the towing and payload and optional diesel power of full-sized pickups and room for 8 to 15 passengers plus their baggage, a certain segment of customers continued to buy the E-Series (and, to a lesser extent, its competitors from GM and Chrysler).

For the first time on all models, the "E-Series" name replaced Econoline, and was sold as such in the literature on commercial vans and ambulance packages, another category dominated by Ford. Heavy-duty cutaway van models, most often used in large box vans and Class C recreational vehicles, also featured "E-350" or "E-450" badging on the front fenders.

2004 saw the replacement of the 7.3 L Power Stroke diesel and the introduction of the new 6.0L Power Stroke with more power than the 7.3, but still detuned from the same engine in the F-Series due to a lack of airflow in the engine compartment. The 6.0 Powerstroke is intercooled, however the 7.3 L lacked an intercooler.

Inside, a new gauge cluster was also added, including a tachometer, along with a digital odometer.

A hydrogen-fuelled version of this engine powers an E-450 shuttle bus produced since 2007, used first in airports in Vancouver, British Columbia and Orlando, Florida.[5]

The E-series is an excellent tow vehicle, due to the available GCWR (Gross Combined Weight Rating) of up to 20,000 pounds, and its relatively low curb weight. No other van or SUV can match its available towing capacity and payload.[6]

95 percent of van sales are to commercial or fleet-end users, about half are cargo vans. The E-Series cargo area features a double-wall design — a full-size van exclusive — which leaves the exterior sheet metal less vulnerable to damage from shifting cargo.[7]

In early 2007, the E-series was listed by Autodata as one of the top 20 best-selling vehicles in the United States, most likely due to fleet sales. The competing models from GM have only been lightly updated since their 1995 redesign. Chrysler abandoned its Dodge Ram Van, a body style essentially unchanged from the 1970s, in favor of the Sprinter, a narrow European Mercedes-Benz van with a 150 hp (112 kW) turbodiesel engine, which has found favor primarily in commercial delivery with its high roof, and high-end, high-mileage Class C RV.

Ford introduced the new E-Series at the New York Auto Show in March 2007. The van received completely redesigned front end sheet metal similar to that of the 2008 Ford Super Duty trucks, which Ford claims makes the vans look "Built Ford Tough." It has been overhauled with better handling, more payload and a sharper look.[8]

Updates to the front end of the van include larger headlights, a larger grille, and a longer hood than previously used on E-Series and Econoline vans. The 6.0 L turbo diesel is retained on the Super Duty E-series, while Super Duty F series received the new 6.4 L twin turbo diesel. Gasoline engines carried over. A series of upgrades to the braking, suspension and steering systems have resulted in improvements in ride and handling, braking performance and load carrying capability, although the Twin-I-Beam front suspension remains. Four-wheel drive is available through Ford Fleet Truck using current model year Super Duty parts.

In 2009 the E-Series received a new dashboard, complete with an available in-dash navigation system and upfitter switches as used in the F-Series Super Duty trucks. Also included is a passenger-side glove compartment, a first for the E-Series. Previously, the glove compartment was integrated in the engine cover.

Another new 2009 option was the rear-view backup camera, which is becoming widely available throughout the industry on smaller vehicles; it is another first for Ford in the full-size van field.

And finally, Ford is the first automotive manufacturer to offer a full-size van that is capable of using E-85; this option is most commonly available on Ford's F-150 with the 5.4L engine. It was available on the 2009 4.6L and 5.4L engines, as Ford aims to continue to dominate the full size van market while delivering relief from high gas prices.

Ford intends to replace the E-Series by 2014 with a global version of the fourth generation Transit platform developed by Ford of Europe. The Transit has been the E-Series' equivalent in Europe since 1965 and competes with the Mercedes-Benz Sprinter.

It is not known if the North American versions of the Transit will be equipped with turbodiesel power which makes up the vast majority of European sales. In order to introduce American buyers to Ford's Euro-vans, the company began importing the mechanically unrelated Transit Connect range for the 2010 model year.

According to the April 2011 issue of Motor Trend, Ford said that the Transit will not affect the E-Series line in any way.

In 2005, a team of Icelander and British adventurers prepared a modified 6x6 Econoline for extreme ice conditions, brought it to the coast of Antarctica and crossed the ice cap to reach the South Pole in 70 hours, setting a new world record of overland travel to the South Pole.[11][12]