The Ford cargo is a range of trucks produced by the Ford Motor Company in both Europe (were it originated) and in the US market as well as in the South American market.

The European Ford Cargo was originally a lightweight truck when launched in 1981 by Ford in the United Kingdom.

The Cargo was styled by Patrick le Quément. It included windows which extended down to floor level in the doors to enable drivers to see pathways in urban locations easier when parking. The Cargo cab was very successful and still survives in Ford trucks made in Brazil and in some Sterling and Freightliner models in the USA.

With the demise of the Ford Transcontinental heavy truck range, British Ford introduced a range of heavyweight Cargo tractor units ranging from 28- to 38-tonnes gcw. The 38-tonners were powered by the Cummins L10 while those at 28- and 32-tonnes had Perkins, Cummins or air-cooled Deutz diesels.

In 1986 Ford sold its European truck operations to the Italian Iveco group, and subsequent vehicles were badged Iveco Ford. After the recession in the 1990s, Iveco rationalised its production operations, and the Langley, Slough (England) plant closed in October 1997, bringing UK Iveco/Ford truck production to an end.

The original lightweight Cargo was replaced in 1993 by the Iveco Eurocargo range, covering the 7.5-ton to 18-ton GVW range.

The Ford Cargo is a cab over engine truck model formerly manufactured in USA by Ford, but now made by Freightliner Trucks and sold as the Sterling Cargo or the Freightliner Cargo. It is commonly seen in US Postal Service duty, and as a city tractor for freight companies such as Roadway Express. (Ford sold its US-commercial truck operations to Sterling Trucks, which was then purchased by Freightliner Trucks)

Ford now sells the Ford LCF as a smaller cab-over alternative in the US to be more competitive with similar trucks, such as the Mitsubishi Fuso Canter and Isuzu Elf (N Series).

Ford Cargo trucks are still made by Argentinian (only the 1722 [1]) and Brazilian Ford subsidiaries, the Turkish Ford Otosan and the Indian Ashok Leyland (Stallion).

These were a relatively modern truck but examples are starting to appear at classic truck shows restored and other events often as transportation for other vehicles, such as tractors, & Agricultural machinery. 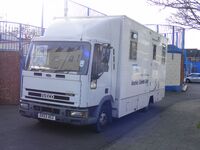 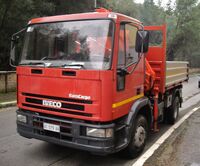 Iveco Eurocargo
Add a photo to this gallery

Retrieved from "https://tractors.fandom.com/wiki/Ford_Cargo?oldid=213183"
Community content is available under CC-BY-SA unless otherwise noted.