The Ford 7810 was built by Ford from 1987 to 1991 in the Basildon Factory. The Model was updated 3 times and a special 'silver Jubilee' edition released in 1989 to mark 25 years of tractor production at the Ford Basildon Factory

The history of this item is unknown. Can you help add any history for it ? 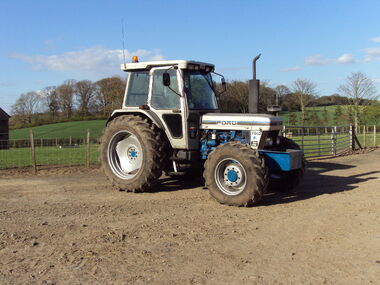 A special edition was made in 1989 to celebrate 25 years of Fords tractors built at Basildon, Essex. The Tractors were all painted in a special Silver livery. The tractors were supplied with some 'optional' extras as standard fitments, but there are variations to spec as some users specified other options apparently according to some reports. At the time the tractors were not that popular as they stood out and some were repainted Blue by the dealers to sell them or later on at trade-in as they were valued less. But now they are sought after by collectors and some 'fakes' exist.

How many were actual built ? (one per dealer ?)

No detailed information on any of these tractors in preservation is available yet.