For over view of related models, see Field Marshall.

Early Series 3A tractors did not have the pressurized cooling system this appeared on tractor 15662 and followed thereafter.

An early Series 3A can be very easily mistaken for a series 3 and the only way to tell them apart is by the serial numbers.

To make the model standout from the other models Marshalls started painting the 3A's in orange paint (Chrome Orange) but this can cause confusion too, as many exported field Field Marshall 3A's left the factory in just primmer and received their final coat of paint at the area distributor. So depending on what colour of paint they had in stock decided what colour the tractor would end up.

Many series 3A tractors have been repatriated from country's to which they were exported when new such as Australia, Argentina, Africa, & Canada in their original green livery.

The easiest way to tell them apart from their series 3 cousins is by the serial number if present.

From Tractor serial number 16808, machines leaving the assembly line received the new split silencer. This made cleaning the exhaust stack much more easier and it it was so successful that it became a standard feature or upgrade for older models (adding to the confusion when looking at tractors at shows and for sale).

The Series 3A was the first Marshall to be fitted with a CAV electric starter system. For a long time, Marshalls had been looking at different ideas on how to start the single cylinder engine, at first they shied away from the idea of electric start, and looked at other ideas, such as hydraulic inertia starting, spring inertia starting etc..

Eventually, Marshalls bowed to the idea of electrical starting and sent a new 3A to CAV's headquarters in London. After a short time the engineers of both Marshalls & CAV came up with a solution that did not require half the amount of modification's to the tractor design that was first thought. Marshalls were keen to advertise the fact that they now had devised a solution to start the Field Marshall with electrical starting equipment, but disappointment shortly followed for potential buyers as the tractor with electrical starting equipment now cost in the excess of £1100, which was a great deal of money in 1952 and almost double what a Fordson Major would have cost at the time. It's not know exactly ho many Electric Start Marshalls were made, but it is believed to not be more than 12 tractors, and only 5 are know to still exist to this day.

Picture shows a Green Series 3A Bought as a derelict wreck by Cameron Anderson back in 2008. After a years painstaking restoration Field Marshall 16138 now stands proudly outside the workshop where she was re-build. 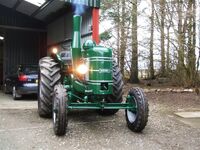 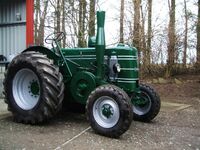 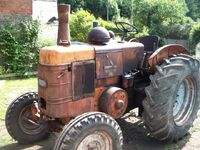 A fair number of these tractors are in preservation and with the popularity driving prices up many are being imported from overseas markets were they are not as popular with collectors.

Retrieved from "https://tractors.fandom.com/wiki/Field_Marshall_Series_3A?oldid=189755"
Community content is available under CC-BY-SA unless otherwise noted.