The Farmall 504 was a row-crop tractor built by International Harvester from 1961 to 1968 in the USA.

The Farmall 504 replaced the 340. The new model had a longer wheelbase and weighed several hundred pounds more. The gasoline engine had a larger bore and longer stroke to increase displacement from 135 ci to 152 ci. The governed rpm was also increased from 2,000 to 2,200 rpm. The diesel engine was given a longer stroke, increasing displacement from 166 ci to 188 ci. The bore and stroke were now the same as for the Farmall 560’s diesel engine, making the International D-188 4-cylinder essentially two-thirds of that 6-cylinder.

The Farmall 504 diesel was very competitive in 1961-62 with the Case 631, Ford 901-series and 4000, John Deere 2010, Massey Ferguson MF65, and Minneapolis-Moline 4-Star. Allis-Chalmers bracketed the Farmall with the smaller, less powerful D-15 and considerably larger D-17. The Oliver 770 was slightly heavier, more powerful, and expensive and it was eventually replaced by the still more powerful 1550. In mid-1968 International replaced the Farmall 504 with the more powerful 544, which competed with the Oliver 1550 as well as the John Deere 2510 and Allis-Chalmers One-Seventy. 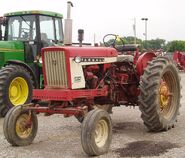 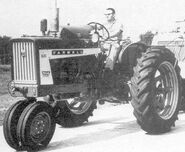