FAW Jie Fang is a wholly-owned subsidiary of the FAW Group in Changchun, Jilin, China. It is the largest manufacturer of heavy trucks in China[1]. The subsidiary was established in 2003 and has more than 22,000 employees, building more than 500 different models of 5-30 ton trucks. They have a capacity of 200,000 units annually.[2]

Throughout the 1950s, the Soviet Army helped China to build up their quickly growing heavy industries. As part of this plan, Russian high technology established the First Automobile Works (FAW) in 1953 at Changchun in Jilin Province Northern China. In 1956, the FAW Car Company Limited introduced the Jiefang CA-10 cargo truck for farmers which was a replica of the original Russian ZIS-150 powered by an old Soviet straightsix petrol engine and it became a quick bestseller for Chinese farmers.

Today under the new name of FAW Jiefang it is a modern industrial company headquartered in Changchun, Jilin, China, and a wholly owned subsidiary of the huge FAW Group. It is one of the largest manufacturer of heavy trucks in China. FAW Jiefang was established in 2003 and has more than 22,000 employees, building more than 500 different models of 5-30 ton trucks. Another division of FAW is the Dandong Automobile Works or DAW based in Liaoning where lighter vehicles are developed and produced such as the DD349 Series. It has an annual production capacity of around 200,000 vehicles. FAW JIEFANG has also worked closely with other domestic and foreign motor vehicle manufacturers with a huge automobile parts network and market share in Asia. Another later model the FAW JIEFANG CA-30 6X6 model shown above was produced from 1958 until 1963 and like the original Russian ZIL-157, had excellent cross-country capabilities and was available in a variety of configurations, such as cargo transport or tractor model for trailers. Both the CA-10 and CA-30 were used extensively by the People's Liberation Army up until the 1990s, when they were largely phased out of service. Today, few remain in private hands. Later they specialized in off-road dump trucks and construction vehicles, most of these are inspired by other later Soviet designs. Since 2015 Iveco company of Italy have since acquired the FAW Jiefang as a partner.

In 1973 the firm designed and produced the massive 60 Ton (when empty) original dumptruck called the JIEFANG CA-390 much of it was inspired by former large Russian dumptrucks models produced by BELAZ and MOAZ. The latest JIEFANG CA-390 model was powered with a Chinese made Chingfa C2956 V12 720 hp (540 kW) diesel engine that produced enough power to match other similar dumptrucks at that time and its production was targeted as a quarry and mining vehicle, these are designed to carry 105 Tonnes of material when fully loaded so it became quite popular as the largest new mining dumptruck available in China so it was popular construction vehicle during the 1970s and 1980s.

This was also the biggest original road vehicle ever made in China at that time until its production ended in the late 1970s of which some are still used as a cheap alternative mining dumptruck to own and run. Later FAW company also manufactured in China under licence from the Mitsubishi Motors of Japan the 1980s and 1990s Japanese MITSUBISHI Fuso F-Series heavy lorry model range with some minor changes but powered by updated Chinese made mechanicals for the Asian/Oriental market and it is now one of China's most important and successful heavy vehicle manufacturers and FAW has also worked closely with Mitsubishi Heavy Industries or MHI of Japan ever since among others. Today the FAW JIEFANG name is one of the Top 10 ranking lorry manufacturers currently made in China.

The massive new CA390 dumptruck first shown in December 1973 in Chengdu in Jilin Province at the time in prototype form. It could carry any 60 tons when fully loaded. The name JIEFANG means ‘Liberation’ and refers to the birth of a new China’ under communist rule during 1949.

The Great Automotive Explorer Erik from ChineseCars.net met a lonely yellow Jiefang CA390 in the great city of Changchun in 2006. Changchun, capital of Jilin Province, is also the city where the CA390 was made. The fantastic dump truck is now a very rare vehicle today.

The full version of the picture I used for my earlier article. It shows one of the first Jiefang CA390 dump truck parading in the center of Changchun city in 1973. The event took place in December so very cold, spectators are all wearing long coats and fur hats. But not even the north eastern freeze could stop them checking out that new dump truck being shown all over the town of Changchun.

The giant machine seemed in good shape in 2006 apparently this one was for sale. The Jiefang CA390 was an important milestone for China. In those Cold War years most of the west didn’t want to sell any machinery to China so the country had to rely on the eastern bloc vehicles as an alternative choice.

The huge Jiefang CA390 measured 9.2 meters long, 4.7 wide and 4.3 meters high. The engine that powers them comes from the New Machinery Factory in Chongqing produced under the name of the Chingfa Diesel C2956 V12 720 bhp 540 kw. Around 1800 FAW Jiefang CA390 Dumptruck models were produced. The model was originally launched in December 1973 and was last produced until May 1978.

In 1983, celebrations came for the Changchun No.1 Automobile Manufacturing Factory in Changchun Jilin Province where most of the Jiefang vehicles were made and have been made for the last fifty years, the company was later renamed as FAW or First Auto Works, all the workers celebrate the production of the one millionth FAW truck model, since the company started vehicle production in 1956. Shown on the right is one of the very first Jiefang (Liberation) CA10 lorry models made of the 1960s and on the left a more modern looking 1983 FAW CA141 Diesel truck.

Another mass produced famous JIEFANG model for the 1980s is the wellknown model the FAW CA141 which it is entirely based on the 1970s ISUZU TD50 Series itself a lorry that was originally made in Japan by ISUZU MOTORS Limited before. In the early 1980s FAW entered an agreement with Isuzu to acquire the rights to produce it in huge numbers in China but with modern diesel and petrol optional running gear featuring a more updated restyled cab design and it was an instant success, several versions were avaialble soon after that.

In the 1990s FAW Jiefang acquired the rights from MITSUBISHI MOTORS Limited of Japan to start production of their former original Mitsubishi FUSO F Series medium to heavy truck models that were popular of the 1980s and by 1995 FAW JIEFANG started production of their new lorry model range called the J3K CA Series ranging from 12 to 36 ton models one original example is shown below.

Very soon by the late 1990s as their development and technology that improved considerably with increased vehicle sales the FAW Jiefang company a division of huge First Auto Works (FAW) and the largest maker of heavy-duty trucks in China, posted a steep rise in 2010 profit. Net income topped 2 billion Yuan last year, compared with less than 300 million Yuan in 2009.

In July 2011 First Auto Works (FAW) celebrated its 58th birthday and FAW JIEFANG has developed their own full range of new updated trucks one of its newest models is the 2012 FAW Jiefang J6H HDI 460bhp tractor for any kind of haulage work.

FAW Jie Fang is made up of other subsidiaries and divisions.

The Qingdao Truck Division, located in Qingdao, China, merged into FAW Group in 1993, and later was assigned to the FAW Jie Fang company. This subsidiary has 2,900 employees, and produces over 70,000 units per year.[5]

A 1980s JIEFANG CA141 Cargolorry Diesel was ISUZU Motors based 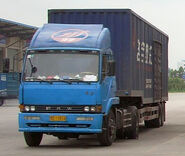 Jie Fang J6P 6x4
Add a photo to this gallery

Retrieved from "https://tractors.fandom.com/wiki/FAW_Jie_Fang?oldid=220148"
Community content is available under CC-BY-SA unless otherwise noted.