The East Lancs Myllennium Vyking is the type of bus body built on the Volvo B7TL chassis by East Lancashire Coachbuilders.

The structure of the Vyking was built using the Alusuisse "System M5438" system, for optimum strength. Glazing was with laminated glass, and gasket glazing came with the bus as standard - with bonded glazing available - and had hopper opening windows. The heating was thermostatically controlled and windows and air vents provided ventilation. The seating was trimmed in customer's required moquette. The floor had a 12mm Xyligen Basileum treated Finnish Birch combi plywood floor on the lower deck and both decks a non-slip flooring. Electrical features were the fluorescent light on the bus' ceilings, and twin circular halogen headlights. Also, CCTV was available. Destination displays only came as manual as standard, doors were air operated and were made of toughened glass. A simple driver's compartment was designed, to make the driver's job easier. Two pack acrylic paint was available for the exterior. [1]

The rear view of a Transdev Yellow Buses Vyking. 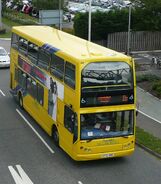 An unusual front and top view, showing what a Myllennium Vyking looks like from this angle.