The East Lancs Lolyne is a type of double-decker bus body built by East Lancashire Coachbuilders. It is the double-deck version of the Spryte. It continued the long line of 'misspelt' names which continued until the Scania OmniDekka. It was built on the Dennis Trident 2 chassis.

Later on in its life there was a decision made by East Lancs whether to change the name to Lowlander. It was decided to use the Lowlander name to body DAF/VDL DB250s. 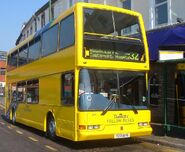 An converted open-top Lolyne, run by The Big Bus Company in London.