Exhibit no's not quoted as a lot of exhibits did not match guide / not displayed / and some were not listed. !

This list is from 2009 and needs updating for this year

The Tractor display was quite large but most disappeared after the Parade mid after noon as rain showers were approaching. A number of exhibits present were nor photographed as exhibit numbers not visible & no reg no so unable to identify them against the guide, with some packed too tight as is a fault at many events.

A selection of the few I did get to follow.

A number of interesting vehicles were present. But a number had disappeared by mid after noon !! 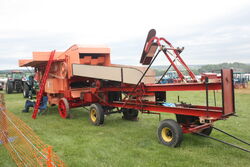 Add your image here
Add a photo to this gallery
Retrieved from "https://tractors.fandom.com/wiki/Duncombe_Park_Steam_Rally/2010?oldid=175114"
Community content is available under CC-BY-SA unless otherwise noted.