The Doe Triple-D or Doe Dual Drive is a model of tractor produced by Ernest Doe & Sons in the 1950s and 1960s in Maldon near Ulting Essex, England. It's two engines and 90 degree articulation made it one of the most unorthodox tractors ever built. This new model was the earliest form of an original articulated 4WD agricultural or farm tractor.

Its Triple-D tractors were developed from a customer's idea. The customer was farmer, George Pryor. He wanted a tractor with increased power to work his heavy clay soil.

Ernest Doe produced a version of the tractor based on his idea of linking two Fordson Major tractors together to create a four-wheel drive. The front wheels and axles from both tractors were removed and the two joined together with a steel turntable to provide a pivot point for the steering. The driver in the rear Fordson controlled both tractors.

During the 1950s farmers in the United Kingdom in need of high horsepower tractors had few options. Essex farmer George Pryor developed an ingenious solution to the problem by creating his own tractor. He did this by purchasing two Fordson tractors, removing the front wheels and axle and linking the two by means of a turntable which provided the steering action powered by hydraulic rams. This left him with a double engined four wheel drive tractor capable of producing more power and outperforming any of the conventional tractors on the UK market at the time.

The Local Fordson dealers Ernest Doe & Sons agreed to build an improved version, the first one was completed in 1958 and called the Doe Dual Power, later changed to Doe Dual Drive and abbreviated commonly to 'Doe Triple-D'.

The vast majority of Triple-Ds were sold in the UK, but a number were exported to the United States, others exported to Holland and elsewhere. Customers could choose models with factory fitted optional weather cabs or without them and the majority were painted blue and orange later models changed to blue and white. Most spare parts are normally easy to find due to their similar components as to those fitted on original FORD agricultural tractors.

The main disadvantage with the Triple-D was the lack of suitable implements for such a powerful tractor, this meant that Ernest Doe & Sons also had to develop and build a range of implements to sell with the tractors.

Other disadvantages stemmed from the use of two engines, this made controlling the tractor more difficult because of the need for two gearboxes. There were two engines and gearboxes to maintain and repair and the probability of breakdowns was increased.

By the late 1960s several companies had developed single engined tractors capable of producing over 100 hp, this competition put the Doe out of production after over 300 had been built. With all production ceasing in about 1973.

They are a sought after by tractor collectors as fairly rare, as less than 500 built in total of all models. Several people have built their own versions. They are one of the most valuable collectors tractors, with some examples fetching over £60,000 at auction.

The Triple-D often makes appearances at agricultural fares such as the Epworth Festival of the Plough in Epworth, Lincolnshire and LeSueur, Minnesota Pioneer Power Days show where it is always a crowd favourite, popular due to its unorthodox build.

Triple-Ds are worth a great deal due to their relative rarity, even unrestored Does can demand extremely high prices at auction.[1]

There are usually a few on display at big preservation events like Tractor World Show at Malvern, Worcestershire, and at the National Tractor Show held at Newark Showground.

A number of Doe tractor owners got together as part of the Doe special display at the ??? show and decided to put a routine to music for the arena parade instead of just driving round in a line around the arena. They have appeared at a number of shows in the UK and Ireland.

There are quite a few copies/fakes about which have been built from parts of broken ones or to similar design by people who either wanted a bigger hp tractor or would like a Doe but cannot find/afford a genuine one, thus building a copy from 2 cheap tractors (and involving a fair bit of work).

Below is a table listing known examples. (please expand the list and help include at least one photo of each machine listed)

The Triple-D is also available in a 1:16 Scale model produced by Universal Hobbies.[4] 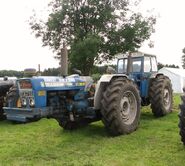 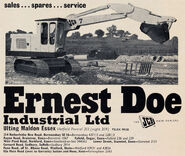