The Diamond T Tank Transporter was a heavy tank transporter, used in World War II and the following years.

Designed as a heavy prime mover for tank transporting, the Diamond T 980 was the product of the Diamond T Company in Chicago. In 1940 the British Purchasing Commission, looking to equip the British Army with a vehicle capable of transporting larger and heavier tanks, approached a number of American truck manufacturers to assess their models. The Diamond T Company had a long history of building rugged, military vehicles for the U.S. Army Quartermaster Corps and had recently produced a prototype heavy vehicle for the US Army which, with a few slight modifications met British requirements and an initial order for 200 was very quickly filled.

A winch of 40,000 lb (18,000 kg) capacity, chain driven off the auxiliary transmission and intended mainly for hauling damaged tanks aboard trailers, was mounted behind the cab.[2]

Production began in 1941.[2] The first batch of the vehicles was received in Britain in 1942 and very quickly demonstrated their rugged reliability in the British campaign in North Africa. Battle-damaged tanks needed to be quickly recovered, often under hostile fire, and returned to workshops for repair. The Diamond T, with its well trained Royal Army Service Corps crew and powerful engine and winch, could accomplish this, even in the harshest desert conditions.[citation needed]

5,871 were eventually built by 1945[2] and were used by virtually every Allied army in every theatre of WWII. The British Army took delivery of around 1,000 during the war years and many continued in service afterwards, being replaced in the early 1950s with the Thornycroft Antar ("Mighty Antar") although a few "T's" remained in tank transporter units up to 1971. Many of those sold off by the Army after the war were snapped up by heavy haulage and recovery specialists, notably Pickfords and Wynns,[5] and they were a familiar sight [1] on Britain's roads, pulling heavy lowloaders and fairground trailers or parked on garage forecourts, in readiness for a heavy rescue operation equipped as Wreckers (breakdown recovery trucks). It suffered from "very limited off-road performance" as a result of only the two rear axles being driven.

Today a number of the 70 year-old Diamond T's can still be found in private ownership in Britain and frequently appear at historic vehicle shows.[citation needed]

This combination unit is referred to as the M19 tank transporter, consisting of the M20 tractor and M9 24-wheel trailer. In the nomenclature system used by the U.S Army Ordnance Corps Supply Catalog this vehicle is referred as the G159. It was superseded by the M26, which would use the same Hall Scott 440 engine.[2] After the introduction of the M26, the U.S. relegated M20s to ammunition hauling, for which they proved "tremendous".[2]

Diamond T tank transporter of the Dutch army carrying an M4 Sherman at the historic army days at Oirschot, the Netherlands 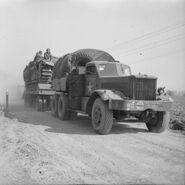 Diamond T tank transporter with a Churchill tank during preparations for crossing the Rhine. 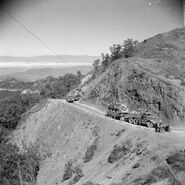 Diamond T tank transporters of the British Army with a load of a Grant ARV, followed by one with a Grant gun tank, in Burma, 1945.