View source
watch 01:36
We're Getting Mutants in the MCU - The Loop
Do you like this video?
Play Sound
This article is about the British reconnaissance vehicle. For the Australian armoured car, see Dingo (scout car). For the modern German infantry mobility vehicle, see ATF Dingo.

The Daimler Scout Car, known in service as the "Dingo" (after the Australian wild dog), was a British light fast 4WD reconnaissance vehicle also used in the liaison role during the Second World War.

In 1938 the British War Office issued a specification for a scouting vehicle. Out of three designs submitted by Alvis, BSA and Morris, the one by BSA was selected. The actual production was passed to Daimler, which was a vehicle manufacturer in the BSA group of companies. The vehicle was officially designated Daimler Scout Car, but became widely known as Dingo, which was the name of the competing Alvis prototype.

Arguably one of the finest armoured fighting vehicles built in Britain during the war, the Dingo was a small two-man armoured car. It was well protected for its size with 30 mm of armour at the front. The engine was located at the rear of the vehicle. One of the ingenious features of Dingo was the transmission; a pre-selector gearbox and fluid flywheel that gave five speeds in both directions. Original version had four-wheel steering; however this feature was dropped in Mk II because inexperienced drivers found the vehicle hard to control.

Although the Dingo featured a flat plate beneath the chassis to slide across uneven ground, it was extremely vulnerable to mines. No spare wheel was carried, but it was not really necessary because of the use of run-flat (nearly solid) rubber tyres instead of pneumatic. Despite the hard tyres, the independent suspension gave it a very comfortable ride. A swivelling seat next to the driver allowed the other crew member to attend to the No. 19 wireless set or Bren gun when required. It had the ideal quiet engine and a low silhouette

The Dingo was first used by the British Expeditionary Force (1st Armoured Division and 4th Northumberland Fusiliers) during the Battle of France. It turned out to be so successful that no replacement was sought until 1952 with the production of the Daimler Ferret. In mid-70s the Dingo was still used by Cyprus, Portugal and Sri Lanka.

Production went through 5 variants which were mostly minor improvements. 6,626 vehicles were produced from 1939 to 1945.

A closely related vehicle, the Lynx Scout Car, was produced by Ford Canada in Windsor, Ontario. The Lynx took a Dingo-type hull and set it on a chassis with four wheel drive taken from the rear mounted engine. While the engine was more powerful than the Dingo's, the gearbox and suspension were inferior. 3255 units were built, entering service sometime around 1943.

Another Dingo clone, the Autoblinda Lince was developed by Lancia, Italy. In 1943-1944, 129 cars were built. They were employed by both German and RSI forces. 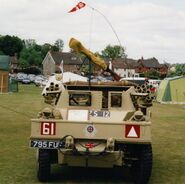 Daimler Dingo at a rally. 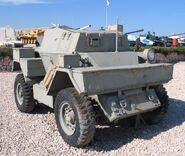 Dingo of the 12th Lancers 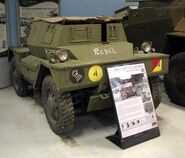 Dingo at the Bovington Tank Museum