DFSK produces microvans, flat-bed commercial trucks and passenger vehicles under the Xiaokang brand and sport utility vehicle under the Fengguang (Fengon in English) and Glory brands.[2] Manufacturing for DFSK takes place in a total of four different facilities, two of which are located in Hubei Shiyan and two in Chongqing.[3]

At the beginning of 2000, Chongqing Yu'an Innovation Technology (Group), a manufacturer of motorcycles and automotive components, and Dongfeng Motor are evaluating the possibility of entering the automotive sector by studying microvans intended for small Chinese businesses. Dongfeng was already producing cars for the French group PSA but was absent from light commercial production and approves this project.

In 2003, the joint venture Dongfeng Yu'an Automobile with headquarters in Chongqing was formed and work began on the construction of a new factory. Yu'an Group acquires from Japan Suzuki the license for the production of chassis, engines and components for microvans and later develops them in just style, Dongfeng takes care of the engineering and testing phase. In 2005, the first vehicle called C-Series officially debuted, a small van offered in multiple configurations (paneled, passenger minibus and pick-up) with Suzuki engines and rear-wheel drive. At its debut, the Yu'an Group changes its name to Chongquin Sokon Industry Group (abbreviated to Sokon in English or Xiaokang in Chinese) and the joint venture consequently becomes Dongfeng Sokon Automobile (abbreviated to DFSK).

In the Chinese market the vehicles are sold as Dongfeng Sokon while in the export markets the name DFSK is used. In both cases, the brand on the grille is Dongfeng's “Dual Wings”.

Subsequently DFSK presents numerous other models of minivans and starts exporting them also in Europe; in the UK they will be distributed by subsidiary Sokon Automobile while in Italy by Giotti Victoria.[4]

In 2013, DFSK decided to enter the lucrative SUV market by starting the design of a seven-seater mid-size vehicle using Dongfeng technologies; this vehicle was designed so that it could have an aggressive price classifying itself as a low-cost family car and had to be sold both in China and abroad. The project debuted in 2016 called Dongfeng Fengguang 580, a five and seven-seater front-wheel or four-wheel drive SUV with Mitsubishi engines. The brand name Fengguang (translated into Fengon in English) is used to distinguish them from the production of minivans called Sokon. On foreign markets, this vehicle will be renamed DFSK Glory (easier to pronounce) using the Dongfeng Dual Wings emblem on the grille, interior and rear.

In the same years, the production of the minivan range was started in Indonesia and Thailand and exports also to South America and Eastern Europe.

DFSK began to assemble and market products in Indonesia in 2015.[5] Plans at the time of launch included an expected production of 50,000 units/year.[5] 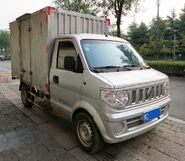 Dongfeng Fengguang/Fengon (or DFSK Glory for foreign markets) is the sub-brand of Dongfeng Xiaokang that produces passenger vehicles. Established in 2008, Dongfeng Fengguang has a series of affordable compact MPVs and CUVs. Currently available products include: