DAF Trucks NV is a Dutch truck manufacturing company and a division of PACCAR. The origins of the company go back to the 1928 when the company was founded in a small workshop. Its headquarters and main plant are in Eindhoven, The Netherlands. Cabs and axle assemblies are produced at its Westerlo plant in Belgium. Some of the truck models sold with the DAF brand are designed and built by Leyland Trucks at their plant in England.

In 1928 Hubert "Hub" van Doorne founded the company as Commanditaire Vennootschap Hub van Doorne's Machinefabriek. His co-founder and investor was Huenges, managing director of a brewery. Van Doorne had repaired Huenges' car several times. Huenges was so pleased with his work that he offered to lend him money if he wanted to start his own shop. Hub started to work in a small workshop on the grounds of the brewery. In 1932 the company, now run by Hub and his brother, Wim van Doorne, changed its name to Van Doorne's Aanhangwagen Fabriek (Van Doorne's Trailer Factory), abbreviated to DAF. Huenges left the company in 1936 and the DAF company was now completely in the hands of the van Doorne brothers.

After the Second World War, luxury cars and trucks were very scarce. This meant a big opportunity for DAF. In 1949 the company started making trucks, trailers and buses, changing its name to Van Doorne's Automobiel Fabriek (Van Doorne's Automobile Factory). The first truck model was the DAF A30.

In the winter of 1954 Hub van Doorne had the idea to use belt drive, just like many of the machines in the factory that were belt-driven, to drive road vehicles. In 1955 DAF produced its first drafts of a car belt drive system. Over the next few years the design was developed and refined. In February 1958 DAF demonstrated a small belt-driven four-seater car at the Dutch car show (the AutoRAI). The public reaction was very positive and 4000 cars were ordered. In 1959 DAF started selling the world's first car with a continuously variable transmission, the small four-seater DAF 600. This was the first of a series of models to be released in subsequent years, including the DAF 33, DAF 44, DAF 55 and DAF 66, all using the innovative Variomatic transmission system.

In 1967 DAF opened a new plant in Born for car production. The DAF 44 was the first model to be produced there.[1]

In 1972, International Harvester of Chicago, Illinois, USA bought a 33% stake in DAF (with the Dutch government holding 25% and the Van Doorne family holding the remaining 42%), forming a joint-venture. This agreement lasted until 1981.

DAF sold its passenger car division, along with what is now the NedCar factory in Born, in 1975 to the Swedish company Volvo Cars, leaving DAF to concentrate on its successful line of trucks.

In 1987 DAF merged with the Leyland Trucks division of Rover Group, and was floated on the Dutch stock exchange as DAF NV. The new company traded as Leyland DAF in the UK, and as DAF elsewhere.

DAF's successful 95 series was introduced in 1988, bringing DAF their first International Truck of the Year title. The 95 brought new levels of driver comfort,(particularly with the high-roof space cab variants) with ample space inside the well sprung cab. The 95 series featured DAF's well proven 12 litre I6 ATi (advanced turbo intercooling) engine in 310,350,360,400 and 430 hp outputs, coupled to a ZF 16 speed range change/splitter gearbox. The basic cab design was so good that it remains in production to this day, latterly as the 95XF and now the XF105, although both these "developments" of the original 95 are totally different machines under the skin.

Other vehicles in the DAF range have included the 7.5 ton 45 series, inherited from Leyland trucks, the cab of which was used on the 18 ton gross 55, the 65,75 and 85 which all used the same cab, the 85 the highest powered of the three and designed as the maximum weight variant.

A short-lived model was the 1990-93 DAF 80, which made use of the T45 Roadtrain cab acquired from the Leyland trucks takeover, fitted with Daf's own 330 ATi engine.

DAF Bus was split off of in 1990 to become a part of United Bus.

Following difficulties in the British market, DAF NV went bankrupt in 1993. A new company, DAF Trucks, appeared in the Netherlands as a result of a management buy-out of the Dutch operations, as did Leyland Trucks and LDV (vans) in the UK.

In 2011, DAF purchased a 19% interest in Czech-based Tatra, and signed an agreement to supply them with engines.[2] 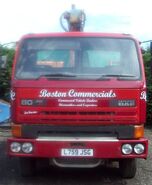