In a flathead or sidevalve engine, the mechanical parts of the valve train are all contained within the block, and the head is essentially a metal plate bolted to the top of the block; this simplification avoids the use of moving parts in the head and eases manufacture and repair, and accounts for the flathead engine's early success in production automobiles and continued success in small engines, such as lawnmowers. This design, however, requires the incoming air to flow through a convoluted path, which limits the ability of the engine to perform at higher revolutions per minute (rpm), leading to the adoption of the overhead valve (OHV) head design, and the subsequent overhead camshaft (OHC) design.

Internally, the cylinder head has passages called ports or tracts for the fuel/air mixture to travel to the inlet valves from the intake manifold, for exhaust gasses to travel from the exhaust valves to the exhaust manifold. In a water-cooled engine, the cylinder head also contains integral ducts and passages for the engines' coolant - usually a mixture of water and antifreeze - to facilitate the transfer of excess heat away from the head, and therefore the engine in general.

In the overhead valve (OHV) design, the cylinder head contains the poppet valves and the spark plugs, along with tracts or 'ports' for the inlet and exhaust gases. The operation of the valves is initiated by the engine's camshaft, which is sited within the cylinder block, and its moment of operation is transmitted to the valves pushrods, and then rocker arms mounted on a rocker shaft - the rocker arms and shaft also being located within the cylinder head.

In the OHC design, the cylinder head contains the valves, spark plugs and inlet/exhaust tracts just like the OHV engine, but the camshaft is now also contained within the cylinder head. The camshaft may be seated centrally between each offset row of inlet and exhaust valves, and still also utilizing rocker arms (but without any pushrods), or the camshaft may be seated directly above the valves eliminating the rocker arms and utilizing 'bucket' tapets.

Some engines, particularly medium- and large-capacity diesel engines built for industrial, marine, power generation, and heavy traction purposes (large trucks, locomotives, heavy equipment etc.) have individual cylinder heads for each cylinder. This reduces repair costs as a single failed head on a single cylinder can be changed instead of a larger, much more expensive unit fitting all the cylinders. Such a design also allows engine manufacturers to easily produce a 'family' of engines of different layouts and/or cylinder numbers without requiring new cylinder head designs.

A number of engines also use twin heads which can be used for 2, 4 and 6 cylinder variants of the same engine. Some early engine designs also used a split block design with the cylinders in pairs as well on a separate cast base block. This layout of separate cylinders and heads is still used in very large marine and industrial engines as it eases manufacturing - smaller less complex castings and maintenance - easier to swap a failed part out.

examples with individual heads include some Caterpillar engines and Zetor tractor engines.

The design of the cylinder head is key to the performance and efficiency of the internal combustion engine, as the shape of the combustion chamber, inlet passages and ports (and to a lesser extent the exhaust) determines a major portion of the volumetric efficiency and compression ratio of the engine. 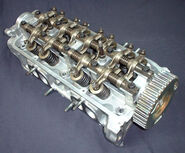 The bottom (left) and top (right) of a Malossi cylinder head for single-cylinder, two-stroke scooters. Hole in the middle for the spark plug, four holes for the cylinder bolt posts.

The cylinder head from a GMC van. The valves and part of the exhaust manifold are visible.