Founded in 1855 as Anjubault, based in the Avenue Phillippe-Auguste in Paris, the firm was taken over by Lucien Corpet in 1868. Corpet's daughter Marguerite married Lucien Louvet, the engineer of the Compagnie Meusienne des Chemins de Fer, which used Corpet locomotives. Corpet died in 1889, and the management of the firm was taken over by Louvet. In 1912, the firm moved to new premises at La Corneuve, and a limited liability company, Corpet, Louvet et Compagnie was formed. The last steam locomotive was built in 1953, but the company is still in business, manufacturing "Caterpillar" earth moving equipment under licence.[1]

The locomotives built by Corpet-Louvet had four different names on the worksplates.

Works numbers 122 to 565 carried L Corpet worksplates. In the 1870s and 1880s, Lucien Corpet continued to build four-coupled locomotives and also started to build six-coupled locomotives, including some designed to be able to be regauged. This design was introduced in 1880. The first metre gauge locomotives built for light railways were works numbers 314 and 315 built for the Chemin de Fer de Cambrésis in 1880 and 1881. Corpet introduced Brown valve gear on some of his locomotives in 1881. This system was popular with Swiss Locomotive Works at Winterthur, Switzerland. Works numbers 341-44 were the first Corpet locomotives with Brown valve gear.[1] 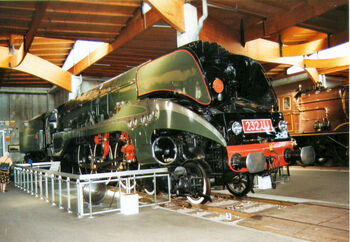 Works numbers 566 to 1415 carried Vve L Corpet & L Louvet worksplates.[2] At the end of the 1880s and into the 1890s many light railways were built in France, many of them to metre gauge. Metre gauge six-coupled tank locomotives formed the bulk of Corpet-Louvet's production until the outbreak of the First World War. In the Ardennes, light railways were built to 800 millimetres (2 ft 7 in) gauge. Corpet-Louvet supplied fourteen locomotives between 1895 and 1906. The line and locomotives were later converted to metre gauge.[3] Corpet-Louvet also built Mallet locomotives, the first being 0-4-4-0s built in 1897 for the Tramways à Vapeur d'Ille et Vilaine. Works numbers 1409 - 13 were 0-6-6-0 Mallets built for the Chemin de Fer du Centre. These were the largest metre gauge locomotives built by Corpet-Louvet.[4]

During the Second World War, Locomotives under construction when Paris was overrun were completed, but some of these could not be delivered to their intended customers, and saw service in France. The largest locomotives built by Corpet-Louvet were ten 2-10-2T locomotives built for SNCF in 1940-42. These weighed 91 tonnes. Six standard gauge 0-8-0ST locomotives were built for Krupp in 1944. It is thought these locomotives carried Krupp worksplates.

Retrieved from "https://tractors.fandom.com/wiki/Corpet-Louvet?oldid=213725"
Community content is available under CC-BY-SA unless otherwise noted.