A convertible is a type of automobile in which the roof can retract and fold away, converting it from an enclosed to an open-air vehicle. Many different automobile body styles are manufactured and marketed in convertible form.

Roof designs vary widely, but a few characteristics are common to all convertibles. Roofs are affixed to the body of the vehicle and are usually not detachable. Instead the roof is hinged and folds away, either into a recess behind the rear seats or into the boot or trunk of the vehicle. The roof may operate either manually or automatically via hydraulic or electrical actuators; the roof itself may be constructed of soft or rigid material. Soft-tops are made of vinyl, canvas or other textile material; hard-top convertibles have roofs made from steel, aluminum, carbon fiber or plastic materials.

Contemporary convertibles are known and marketed under several different terms due to the convergence of body styles over the years. A soft-top convertible may also be referred to as a cabriolet, cabrio, spyder, or spider, although two-seater soft tops often retain the name roadster, referring to their body style. Hard-tops are marketed under the terms coupé cabriolet, coupé convertible or simply retractable hardtop, while two-seaters more commonly use coupé roadster/roadster coupé.

The collapsible textile roof section (of cloth or vinyl) over an articulated folding frame may include linings such as a sound-deadening layer or interior cosmetic headliner (to hide the frame)  — or both — and may have electrical or electro-hydraulic mechanisms for raising the roof. The erected top secures to the windshield frame header with manual latches, semi-manual latches, or fully automatic latches. The folded convertible top is called the stack.

Convertibles offer the flexibility of an open top in trade for:

Folding textile convertible tops often do not hide completely the mechanism of the folded top or can expose the vulnerable underside of the folded top to sun exposure and fading — in which case tonneau covers of various designs snap or secure into place to protect the folded roof and hide the mechanicals. Detachable foldable, rigid or semi-rigid covers require space-consuming storage inside the vehicle — and sometimes complicated installation from outside the stationary vehicle. Foldable vinyl and cloth covers can be prone to shrinkage, further complicating installation.

Evolution of the tonneau cover

Convertibles such as both the first and eleventh generation of the Ford Thunderbird and the second and third generations of the Mercedes SL featured as standard or optional equipment fully rigid, manually installable hardtops — later examples including heatable rear windows. These hardtops provided acoustic insulation but also required space-consuming off-season storage — and a cumbersome two-person installation. The optional aluminum (i.e., lightweight) detachable hardtop for a Porsche Boxster weighed 51 lb (23 kg).[4] Two current-day examples of vehicles with a detachable hardtop available are the Jeep Wrangler, and the Mazda MX-5.

Convertible side windows have evolved from non-existent in the earliest models, to detachable side screens and manually or power operated glass side windows. Rear-windows have evolved similarly, with plastic rear-windows appearing as late as the first generation Porsche Boxster. Contemporary convertibles and retractable hardtops feature heatable glass rear windows to maximize visibility — though rear windows often can compromise visibility by their size, as with the case of the very small rear window and restricted visibility of the Mitsubishi Eclipse Spider. Plastic windows can degrade, fade, yellow and crack over time, diminishing visibility.

Windblockers, also known as wind screens, wind deflectors, or wind shields, minimize noise and rushing air from reaching the occupants — specifically cold air (and the noise that comes with it) rushing from behind the passengers having been forced over the windshield then returning to the natural lower-pressure zone where the passengers sit.

Mercedes and Audi currently offer a feature that routes a heating duct to the neck area of the seat on SLK, SL and A5/S5 models, marketed as the "Air Scarf".

According to the chief engineer for the 2008 Chrysler Sebring, Jim Issner, the windblocker for the Sebring reduces "wind noise by approximately 11 to 12 decibels".[5]

Contemporary convertible design may include such features as electrically-heated glass rear window (for improved visibility), seat belt pre-tensioners, boron steel reinforced A-pillars, front and side airbags, safety cage construction — a horseshoe like structure around the passenger compartment — and roll over protection structures or (ROPS) with pyrotechnically charged roll hoops hidden behind the rear seats that deploy under roll-over conditions whether the roof is retracted or not.

Notably, the Volvo C70 retractable hardtop includes a door-mounted side impact protection inflatable curtain which inflates upward from the interior belt-line — vs. downward like the typical curtain airbag.[6] The curtain has an extra stiff construction with double rows of slats that are slightly offset from each other. This allows them to remain upright and offer effective head protection even an open window. The curtain also deflates slowly to provide protection should the car roll over.

Roadster: Originally the term roadster suggested a minimal convertible, possibly with a frame that required actual assembly (i.e., not retracting) and separately installable soft "window" panels — offering little protection from inclement weather and requiring a time-consuming, complicated installation. Examples would be the vintage Porsche Speedster introduced in 1955, and the classic Jaguar XK120 Roadster unveiled in 1948. A contemporary roadster is a two-seater convertible, like the Audi TT, the modern classic BMW Z8, and Pontiac Solstice.

Landau & Rigid Door: Citroën's early Citroën 2CV featured a roof that rolled back on itself leaving rigidly framed side doors in place — followed in concept by such cars as the 1950 Nash Rambler Convertible Coupe.

Citroën currently markets the C3 Pluriel (Pluriel is a cognate with the English plural), which can be configured into five iterations, hence the name:[7]

Peugeot presented the a concept four-door retractable hardtop convertible, the Peugeot 407 Macarena in 2006.[9] Produced by French coachbuilding specialist Heuliez, the Macarena's top can be folded in 60 seconds,[9] with a steel reinforcing beam behind the front seats incorporating LCD screens for the rear passengers into the crossmember.[9]

Drophead Coupe, Cabriolet or Cabrio: A type of convertible with only two doors,[10] and thereby recalling the cabriolet carriage. With its Mazda RX7 convertible, Mazda introduced a two-seater convertible with a removable rigid section over the passengers, removable independently of power operated textile section behind with heatable glass rear window. During the 1980s, Jaguar produced an XJ-SC with two removable panels over the front seats and a partial fold-down convertible section in the back. It retained the rear side windows of the coupe and had fixed cant rails above these and the door glass. This allowed an almost full convertible with roll-over safety. Going back in Jaguar history, during the 1950s the XK 120 Drophead Coupe (DHC) and later variants, provided open-air motoring with quite civilized fully-lined insulated tops with the weather-protection of the hardtop models.

History in the United States

Until the 1910 introduction by Cadillac of the first closed-body car, the convertible was the primary body style. US automakers manufactured a broad range of models during the 1950s and 1960s — from economical compact-sized models such as the Rambler American and the Studebaker Lark to the more expensive models such as the Packard Caribbean, Oldsmobile 98, and Imperial by Chrysler.

Threatened rollover safety regulations in the mid-1970s led to diminished popularity by the 1970s. In 1976 Cadillac marketed the Eldorado as "The last convertible in America". During this period of very low convertible production, T-tops became a popular alternative.

Elsewhere globally, convertible production continued throughout this era with models such as the Mercedes SL, the VW Beetle Cabriolet, the VW Golf Cabriolet, and the Jaguar E-type.

In the 1980s convertibles such as the Chrysler LeBaron and Saab 900 revived the body style in the United States — followed by models such as the Mazda Miata, Porsche Boxster, Audi TT and later retractable hardtop models.

A retractable hardtop, also known as coupé convertible or coupé cabriolet, is a type of convertible that forgoes a folding textile roof in favor of an automatically operated, multi-part, self-storing hardtop where the rigid roof sections are opaque, translucent or independently operable.

The retractable hardtop solves some issues with the convertible, but has its own compromises, namely mechanical complexity, expense and more often than not, reduced luggage capacity. A 2006 New York Times article suggested the retractable hardtop may herald the demise of the textile-roofed convertible,[11] and a 2007 Wall Street Journal article suggested "more and more convertibles are eschewing soft cloth tops in favor of sophisticated folding metal roofs, making them practical in all climates, year-round."[12]

Retractable hardtops can vary in material (steel, plastic or aluminum), can vary from two to five in the number of rigid sections and often rely on complex dual-hinged trunk (British: boot) lids that enable the trunk lid to both receive the retracting top from the front and also receive parcels or luggage from the rear — along with complex trunk divider mechanisms to prevent loading of luggage that would conflict with the operation of the hardtop.

1922 Ben P. Ellerbeck conceived the first practical retractable hardtop system in 1922 — a manually operated system on a Hudson coupe that allowed unimpeded use of the rumble seat even with the top down.[26] — but never saw production.[27]

1935 Peugeot introduced the first production, power-operated retractable hardtop in 1935, the 402 Éclipse Décapotable,[11] designed and patented by Georges Paulin.[11] The French coachbuilder, Marcel Pourtout, custom-built other examples of Paulins designs on a larger Peugeot chassis as well.[11] The first Eclipse 402s offered a power-retractable top, but in 1936 was replaced by a manually operated version on a stretched chassis, built in limited numbers until World War II.[26]

1953 Ford Motor Company spent an estimated US$2 million (US$16,424,469 in 2022 dollars[28]) to engineer a Continental Mark II with a servo-operated retractable roof. The project was headed by Ben Smith, a 30-year-old draftsman.[29] The concept was rejected for cost and marketing reasons.[26]

1955 Brothers Ed and Jim Gaylord showed their first prototype at the 1955 Paris motor show,[30] but the car failed to reach production.

1957 Ford introduced the Skyliner in the United States. A total of 48,394 were built from 1957 to 1959.[26] The retractable top was noted for its complexity and intermittent reliability in the pre-transistor era. Its mechanism contained 10 power relays, 10 limit switches, four lock motors, three drive motors, eight circuit breakers, as well as 610 feet (190 m) of electrical wire,[26] and could raise the or lower the top in about 40 seconds. The Skyliner was a halo car with little luggage space (i.e., practicality), and cost twice that of a baseline Ford sedan.

1989 Toyota introduced a modern retractable hardtop, the MZ20 Soarer Aerocabin. The car featured an electric folding hardtop and was a marketed as a 2-seater with a cargo area behind the front seats. Production was 500 units.

2006 Peugeot presented the a concept four-door retractable hardtop convertible, the Peugeot 407 Macarena.[9] Produced by French coachbuilding specialist Heuliez, the Macarena's top can be folded in about 30 seconds.[9] It has a reinforcing beam behind the front seats which incorporates LCD screens into the crossmember for the rear passengers.[9] 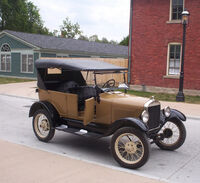 Austin A40 Sports, c.1951, a four passenger, aluminum bodied convertible designed by Eric Neal and manufactured by Austin of England in conjunction with Jensen Motors 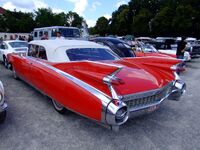 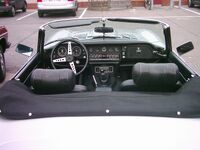 Cadillac Allanté c. 1993, with detachable, rigid plastic tonneau cover. Built in Italy by Pininfarina, completed bodies were flown to the U.S. 56 at a time in specially equipped Boeing 747 with final assembly at Hamtramck, Michigan.[34] 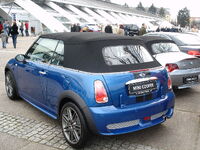 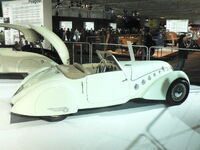 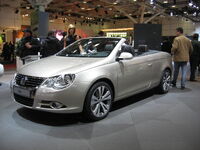 Volkswagen Eos c. 2007, the five-segment top features an independently sliding sunroof, the roof designed and built by OASys, a subsidiary of Webasto Germany. 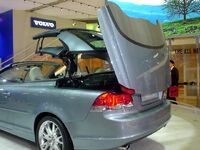