Start a Wiki
This article is about vehicles used to carry people on longer journeys. For urban buses, see bus.

A coach (also motor coach) is large motor vehicle for conveying passengers on excursions and on longer distance express coach scheduled transport between cities - or even between countries. Coaches normally have a luggage hold separate from the passenger cabin and are normally equipped with facilities required for longer trips including comfortable seats and sometimes a toilet.

The original meaning of the term coach was that of a horse-drawn carriage designed for the conveyance of more than one passenger and of mail, that is covered for protection from the elements. It was applied to railway carriages in the 19th century, and later to motor coaches.

Horse drawn chariots and carriages ('coaches') were used by the wealthy and powerful where the roads were of a high enough standard from possibly 3000BC. In Hungary during the reign of King Matthias Corvinus in the 15th century, the wheelwrights of Kocs began to build a horse-drawn vehicle with steel-spring suspension. This "cart of Kocs" as the Hungarians called it (kocsi szekér) soon became popular all over Europe. The imperial post service, employed the first horse-drawn mail coaches in Europe since Roman times in 1650, - as they started in the town of Kocs the use of these mail coaches gave rise to the term "coach". Stagecoaches (drawn by horses) were used for transport between cities from about 1500 in the United Kingdom until displaced by the arrival of the railways.[1]

One of the earliest motorised vehicles was the Charabancs which was used for short journeys and excursions until the early years of the 20th century. The first 'motor coaches' were purchased by operators of those horse-drawn vehicles in the early 1900s[2] by operators such as Royal Blue Coach Services who purchased their first Charabanc in 1913[3] and were running were running 72 coaches by 1926.[4]

Coaches vary considerably in quality from country to country and even within counties. Higher specification vehicles include reclining upholstered seats, air-conditioning, overhead storage bins, passenger-controlled lights and ventilation. In addition small tables for small snacks, small video screens to show TV shows and/or videos, and. Larger items of luggage are stored below the floor, and are accessible from outside panels. A toilet will normally be included. Coach typically have a single door and possibly also a wheelchair-lift access.

Major manufacturers include Plaxton, Neoplan, Marcopolo, Irizar, Scania and many others. It is reasonably common for one manufacturer to build and supply a chassis and for another to then construct the 'coachwork' (the passenger compartment) onto this chassis.

A representative selection of vehicles currently in use in different parts of the world.

A double-decker Neoplan Jumbocruiser
Add a photo to this gallery

A selection of vehicles in use in different parts of the world in the past. 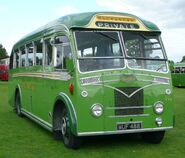 A Leyland Tiger used by Southdown Motor Services in England 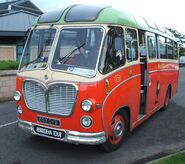 A 1920 Punch showing an excursion by charabanc

Wikimedia Commons has media related to:
Bus
Retrieved from "https://tractors.fandom.com/wiki/Coach_(vehicle)?oldid=59615"
Community content is available under CC-BY-SA unless otherwise noted.