After 2003, the Express and Savana had updated sheetmetal similar to the GMT800 light trucks and SUVs, and at the same time, fitted with the LS engines. In 2004 Stability Control (Stabilitrak) was added to all passenger vans. In 2008 the interior was updated and side impact roof airbags were standard on all passenger models. They also offer the E85 Flexfuel Vortec 5.3L V8 engine in both the 2008 Express 1500 Work Van and Passenger Van. The 6.6L Duramax Diesel V8 was added as an option for 2006.

The cargo variety of the Express/Savana is popular as a work vehicle, often used by electricians, plumbers, and others needing to haul a variety of large items. In this way, it is the North American equivalent of the ubiquitous white vans in the United Kingdom. In the Netherlands the Express/Savana is available as a civilian vehicle, ambulance, and police accident van. The police van it is used by the Police of Amsterdam.

The Express/Savana is also available as a passenger van, seating 8 to 15 passengers (depending on the model), and is often used as a tow vehicle, ambulance, shuttle bus, or school bus. Both the cargo and passenger models, as well as the cutaway versions, often serve as the basis for conversion vans, motorhomes, and wheelchair accessible vans.

There was a limited edition model of the Chevy Express passenger variety, named the LT. This type was a GM factory made conversion that included a Bose sound system, two flip down flat panel television monitors, a VCR, leather seats, aluminum wheels, extra trim, and an advanced GM stereo system with CD and cassette. This model was discontinued around the year 2003 and was meant as a trial sale.

Chevrolet Express was also the name of a concept car first shown in 1987. It was a turbine powered, drive-by-wire car made to show the possibilities of future limited-access highways.[1] 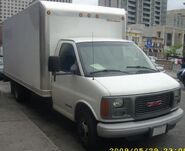 Wikimedia Commons has media related to:
Chevrolet Express
Retrieved from "https://tractors.fandom.com/wiki/Chevrolet_Express?oldid=181624"
Community content is available under CC-BY-SA unless otherwise noted.