For the "Chevrolet Captiva Sport" sold in the Americas, see Opel Antara.

The Chevrolet Captiva is a crossover SUV developed by GM Daewoo, the South Korean subsidiary of General Motors (GM) and sold under the Chevrolet brand. The Captiva utilises the GM Theta platform, and derives from the Chevrolet S3X concept car of 2004. The Theta platform also underpins the Opel Antara, the Captiva's mechanical derivative also built by Daewoo. Sold internationally as the "Chevrolet Captiva", South Korean-market cars were badged Daewoo Winstorm up until 2011 when the international name was adopted. Australasian-specification models are badged Holden Captiva.

The first generation Captiva, designated C100 by Daewoo and CG in Holden's terminology, launched in 2006.[2][3] Styling of the Captiva was inspired by the 2004 Chevrolet S3X concept car.[4] The S3X concept was developed by GM Daewoo's design center in Bupyeong-gu, Incheon and is based on the GM Theta platform. It premiered at 2004 Paris Motor Show.[5] Another concept car, by Daewoo, the Chevrolet T2X premiered at the 2005 Seoul Motor Show with its design was based on the S3X, using a shortened platform.[6] The T2X is referred to as a sport utility coupe,[7] accounting for its rear hinged doors, lack of conventional B-pillars, and shortened wheelbase[8]—features that were first revealed on the "Daewoo Oto" (later renamed "Daewoo Scope") concept at the 2002 Seoul Motor Show.[9][10][11] Production was slated for late 2006,[6] but as of 2009 no further announcement has been made.[12]

For the Captiva, the production version of the S3X, both five- or seven-seat configurations are available.[13] Standard safety features include: anti-lock brakes, electronic stability control (ESC), front seatbelt pre-tensioners and force limiters, and driver and front passenger airbags. Side curtain airbags are standard on higher luxury level variants in some markets.[14] In crash safety tests conducted by Euro NCAP, the Captiva was given a four out of five start crash rating.[15] The results from the test were helped by the use of high-strength steel used in the body shell which was designed to spread crash forces over distinct load channels, therefore ensuring the safety of the occupants within the safety cell.[16] The vehicle's optional active all-wheel drive system is fully incorporated with the ESC and anti-lock braking systems, consequently increasing car handling and control. When the driving conditions determine the need for improved traction, the vehicle’s all-wheel drive system instigates. In ordinary driving situations, only the vehicle's front wheels are employed.[16]

A revised Captiva range will be released in the second quarter of 2011. The facelifted Captiva features a new front fascia reminiscent to that of the Chevrolet Aveo (T300). Other noticeable cosmetic differences comprise LED turn signals on the door-mounted mirrors, redesigned wheels and revised side air vents. A re-tuned suspension, four new engines and two new transmissions will also feature.

The Captiva is powered by the Australian (Holden)-built 3.2 litre Alloytec V6 engine mated to a five-speed automatic transmission, featuring Active Select.[13] This engine is also shared by the Captiva's Opel Antara derivative which utilises a different design, but shares the same underpinnings and powertrain components.[17] A four-cylinder VCDi common rail turbodiesel engine, co-developed with VM Motori was later introduced into the range.[18] 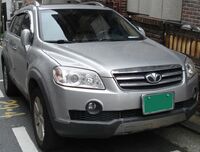 South Korean cars were branded "Daewoo Winstorm" from 2006.[19] From 2008 onwards the Opel Antara became available in the Winstorm range, as the "Daewoo Winstorm MaXX".[20][21] As part of GM's strategy to phase out the "Daewoo" brand worldwide, since early 2011 the Winstorm has been marketed under the global "Chevrolet Captiva" name in South Korea. This rebranding came after the March 2011 renaming of "GM Daewoo" to "GM Korea".

The Chevrolet Captiva was launched in Vietnam during 2006. The Captiva in Vietnam is manufactured by Vidamco (GM Daewoo Vietnam), with 20 percent of the vehicle's parts are manufactured in the country. Since 2006 through to July 2009, 8,500 Captivas had been sold in Vietnam.[22]

Holden in Australia and New Zealand have sold the Chevrolet Captiva under the "Holden Captiva" name since November 2006, after announcing the model the previous September.[23] The Captiva launched with the 3.2-litre V6 and five-speed automatic transmission, but March 2007 saw the addition of the 2.0-litre diesel engine with five-speed manual or optional automatic.[24] While initially manufactured in South Korea, production was temporarily shifted to Thailand from September 2007 until early 2008 while GM Daewoo upgraded its production facilities in South Korea to cope with global demand.[25]

Specification levels were SX, CX, and LX, with a range-topping Captiva MaXX variant offered, although this was a rebadge of the closely related Opel Antara.[26] The Antara-derived MaXX remained on sale in Australia until 2008,[27] with New Zealand sales continuing on until the end of 2009.[28] When the Holden resurrected the Antara-based model as a price-leading five-seater "Captiva 5" in December 2009,[29] the seven-seat only Chevrolet-based models were renamed to "Captiva 7".[30][31]

Revisions to the Captiva 7 range were announced in February 2010, designated "Series II", with a March on-sale date.[32] Changes included the adoption of the facelifted front-end fascia, as applied to Chevrolet versions, but with a Holden-specific grille and air intake.[32] New design alloy wheels,[33] "Altezza" tail lamps,[34] and other trimmings feature, as does a revised interior centre console.[35] Equipment-wise, the revised centre console houses a new 7-inch multifunction display in LX trim, which incorporates satellite navigation and a rear-view camera.[32] Revised powertrains also feature on the Series II Captiva 7. The base setup is the SX trim with the 2.4-litre petrol utilising front-wheel drive; the 2.2-litre diesel is optional. The CX and LX variants add all-wheel drive and offer the 3.0-liter V6 as standard, with the 2.2-litre diesel remaining optional. All three engines are paired with a six-speed automatic.[32]