Chamberlain was make of tractors manufactured in Australia by Chamberlain Industries. The company was started in 1949 by a tractor engineer Bert Chamberlain. The American firm of John Deere bought a stake in the company in 1970 with John Deere eventually taking control. In 1986, production of Chamberlain John Deere tractors was ended.

...to produce a tractor entirely suited to the large land holdings of Australian farmers... — Melbourne engineer A.W. (Bert) Chamberlain in the 1930s"

Whilst Bert Chamberlain was working as a tractor mechanic in Victoria he designed a tractor and built a prototype tractor around what he believed farmers wanted. It became the basis of the 40K model tractor.

After the 2nd World Ear the Australian government were offering payments to Manufactures to build tractors of £72 for each one sold. But the anticipated demand had been over estimated as farmers had ordered several times to try to get up the que as needy.[2]

The Western Australian Government having heard of Bert Chamberlain's plan to build tractors persuaded the Chamberlains to use an ex-munitions factory; in Welshpool, Western Australia. Thus the first Tractors rolled off the production line in 1949.[1]

The first Chamberlain tractor produced was the model 40k which had 40 horsepower twin-cylinder, horizontally opposed engines. They weighed about four tonnes and were considered to be ideal for the needs of Australian farmers.[3]

Production was hit by the Government importing 2000 American tractors for sale.[2]

In 1955 the production of kerosene powered tractors was replaced by diesel powered models and as a publicity stunt in the same year Chamberlains entered the new diesel powered Champion model tractor in the Redex around Australia rally trial, it became known as "Tail End Charlie"[3]

After 1955 they switched to Diesels, using Perkins, Meadows and Detroit Diesel engines.

In 1970 the John Deere Company of America purchased a controlling interest in Chamberlain.[3]

An expansion and refit of the Welshpool Plant was undertaken in 1978. During the 1980s Chamberlain became a fully owned subsidiary of Deere & Company thus trading as Chamberlain John Deere.[1]

The Welshpool manufacturing site was redeveloped and a new office complex built in 1982, however by 1986 due to significant decline in demand, the manufacture of the famous Chamberlain tractors ceased.[1]

Total build of Chamberlain tractors believed to be about 40,000.[4] 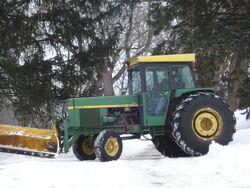 Chamberlain are a rare model in the UK with the odd example imported mainly by collectors.

Chamberlain tractors on display at the Great Dorset Steam Fair

Trailed cultivator on a Chamberlain Super 90 reg no APO 219C