The Caterpillar 951B has a four-cylinder Caterpillar D330 engine producing 85 hp (63 kW) (FWHP). It comes standard with electric start.

A direct drive transmission was offered in the 72J and 78J prefix units.

The 951B was manufactured in;

Most 951C units continued the previous 951B prefixes, but one new Japanese was introduced, with a 19H prefix.

The 19H unit has a four-cylinder Caterpillar 3304 engine producing 85 FWHP. It has a direct drive transmission. It comes standard with electric start, pedal steer, and a sealed loader linkage.

Production ended in Japan and France in 1981.

Based on data from the sales database of Ritchie Bros. Auctioneers, it is estimated that more than 17,200 Caterpillar 951B/951C crawler loaders have been produced.

A number of examples are now with collectors in the UK and the USA.

Add your 951B and C photos below 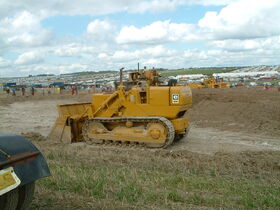 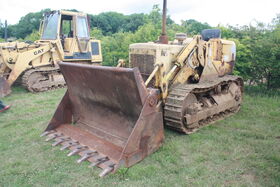 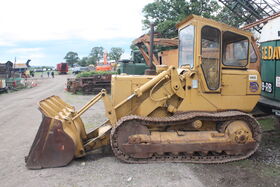 Retrieved from "https://tractors.fandom.com/wiki/Caterpillar_951B_Crawler_Loader?oldid=213686"
Community content is available under CC-BY-SA unless otherwise noted.