The Camill name comes from the acronym of C for Campbell-McGill with Mill of Muir-Hill which both firms combined to give the new name of CAMILL for ADT production under the name CAMILL-MUIRHILL Series. Their main project was to manufacture all new ADT models using standard Fordson Tractor running gear underneath but with dumptruck fullscale production by Muir-Hill, While partner Campbell-McGill would provide financial and distribution of these new Camill machines. The first model produced was the Camill 410 ADT a fully articulated offroad 4WD dumptruck built and marketed by Muir-Hill (The trading name of E Boydell & Co Ltd) located at Gloucester and Manchester.

A second new model arrived in 1964 with revised lines the Camill 610 ADT with modern Fordson mechanicals and a improved closed drivers cab though only available without 4X4 this time. These brand new vehicles were soon joined to the already existing Muir-Hill construction machinery model range and were available until the mid 1970s although Camill dumptrucks only found moderate sales success. Both these units were originally designed by Campbell & McGill Contractors Ltd based in Devon England.

The 410 model consisted of a single axled tractor with one man cab powered by a Fordson 4 cylinder diesel engine cantilevered at the front and a transmission providing drive to all four wheels using Ford tractor mechanicals shared with the same Ford models made at their Dagenham and Cork Ireland factories.

By 1964 the Camill 410 had been joined by another model the larger Camill 610 4WD ADT with a new closed oneman cab, new improved Fordson 6 cylinder 96 bhp diesel engine and using a new torque-converter transmission with powershift box eliminating the need of a clutch and conventional gearbox. Heavier payloads up to 9072 kg were now possible and this new model was now called the Camill-Muir-Hill ADT often carrying both names at the front but these units had a short production with only 50 Camill dumptruck units made most of them were built by Muir-Hill in Manchester all painted in yellow livery just like most UK construction machinery names of the time.

Muir-Hill under their new main designer called David J. B.Brown (Later Of DJB/Artix fame) joined the company in 1965 and MH developed a new range of loading shovels and also the Muir-Hill 101 tractor which was then hitched to a new Muir-Hill 20TD dump trailer introduced in 1969 based on some ADT prototype machines he had designed. This was another major development for MH to make and maybe mass produce an original ADT, but the main successful model they sold the most was the Camill Muir Hill 410 4X4 ADT that was made with Ford farm tractor components and parts shared with their own MH agricultural tractor range. 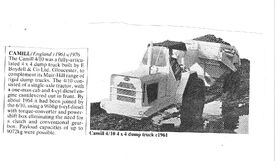 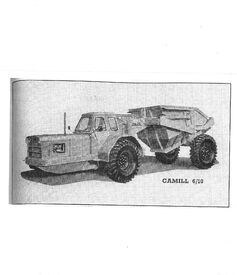 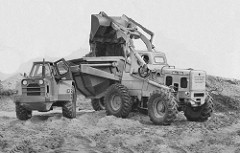 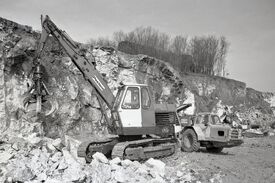 The Earthmover Encyclopedia by Keith Haddock published by Motorbooks 2002

Retrieved from "https://tractors.fandom.com/wiki/Camill?oldid=213849"
Community content is available under CC-BY-SA unless otherwise noted.