Burrell no. 3890 is an Showman's road locomotive that was built in March 1921 by Charles Burrell and Sons in Norfolk. This engine is currently named Majestic and owned by The Saunders Collection of Baldock Bedfordshire.

Built for Messrs. J. H. Herbert of Southampton. It worked with them until 1940, but remained in the family’s ownership until 1952 when it was purchased for preservation by ?.

In 1954 the engine passed to W. Hunt of Birmingham.

It was purchased from E. Cole in 1999 by the Saunders Collection.

Lettering on the Canopy reads

Origins of the Name "Majestic"

Majestic was named after the steam launch she was carried by when being transported. Majestic is slightly special compared to most showmans engines due to extra brass work and the boiler bands not being flat, this is because she was displayed at the Royal Show as an example of Burrell's work 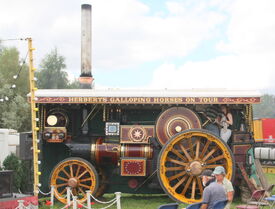 Were is the info from ?

Retrieved from "https://tractors.fandom.com/wiki/Burrell_no._3890?oldid=142929"
Community content is available under CC-BY-SA unless otherwise noted.