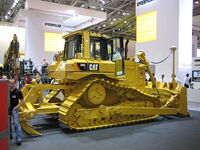 A bulldozer is a crawler (caterpillar tracked tractor), equipped with a substantial metal plate also with oil and water (known as a blade), used to push large quantities of soil, sand, rubble, etc, during construction work. The term "bulldozer" is often used to mean any heavy engineering vehicle, but precisely, the term refers only to a tractor (usually tracked) fitted with a dozer blade. That is the meaning used herein.

The first bulldozers were adapted from Holt, Best, Allis-Chalmers, Cletrac and other makes of farm crawler tractors that were used to plough fields and do other farming work. Their versatility in soft ground for logging and road building led directly to their becoming the armoured tank in World War I.

The history of the 'dozer blade really goes back the late 19th century when some enterprising souls began hitching pairs of horse or mules into a device somewhat resembling a dozer blade to push fill imported by carts into gullys and arroyos. Pushing forward wasn't too bad and the set-up could push a cubic yard or so of material over the edge each time. How-wevver, backing the whole issue up or getting it turned for another push around was a whole 'nuther' ball game, especially since the blade could not be lifted.

In 1923, a young farmer named James Cummings and a draftsman named J. Earl McLeod made the first designs for a bulldozer. A replica is on display at the city park in Morrowville, Kansas where the two built the first bulldozer.

In 1926, R. G. LeToruneau had a contract to build a road between Oakland and Stockton in California, through Crow Canyon and across the Dublin Mountians. He was faced with fillng a lot of gullys and arroyos in the process. He had tractor-drawn scrapers bringing the fill material to these gullys but they could not get it much closer than about thirty feet from the edge, let alone get it over the edge into the gully where it needed to be. To solve this probelem, he fitted a blade to the front of a Best tractor - in those days probably a Best Sixty crawler - added an electric winch to lift the blade and proceeded to push the fill material into the gullies easier than anyone had ever done it before. (See page 140 of 'Mover Of Men And Mountains' by R. G. LeTourneau.)

By the 1920s, tracked vehicles became common, particularly the Caterpillar 60. To dig canals, raise earth dams, and do other earthmoving jobs, these tractors were equipped with a large thick metal plate in front. This metal plate (it got its curved shape later) is called a "blade". The blade peels layers of soil and pushes it forward as the tractor advances. Several specialized blades have been developed: for high volume loads such as coal, rakes to remove only larger boulders, or blades with razor sharp edges to cut tree stumps. In some early models the driver sat on top in the open without a cabin. These attachments, home built or by small equipment manufacturers of attachments for wheeled and crawler tractors and trucks, appeared by 1929, widespread acceptance of the bull-grader does not seem to appear before the mid-1930s, and the addition of powered down force made them the preferred excavation machine for large and small contractors alike by the 1940s, by which time the term "bulldozer" referred to the entire machine and not just the attachment.

Bulldozers grew more sophisticated as time passed. Important improvements include more powerful engines, more reliable drive trains, better tracks, raised cabins, and hydraulic (instead of early models' cable operated) arms that enable more precise manipulation of the blade and automated controls. As an option, bulldozers can be equipped with rear ripper claw(s) to loosen rocky soils or to break up pavement (roads). A more recent innovation is the outfitting of bulldozers with GPS technology, such as manufactured by Topcon Positioning Systems, Inc., Trimble Inc., or Mikrofyn [www.mikrofyn.com] for precise grade control and (potentially) "stakeless" construction. The best known maker of bulldozers is probably Caterpillar which earned its reputation for making tough durable reliable machines. Although these machines began as modified farm tractors, they became the mainstay for big civil construction projects, and found their way into use by military construction units world-wide. Their best known model, the Caterpillar D9, was also used to clear Landminess and demolish enemy structures.

History of the word Edit

These appeared as early as 1929, but were known as "bull grader" blades, and the term "bulldozer blade" did not appear to come into widespread use until the mid 1930s, and now refers to the whole machine not just the attachment. In contemporary usage, "bulldozer" is often shortened to "dozer".

Additional information: I understand that the original term was a 'bull dose', a dose of anything large enough for a bull. The term was then applied to the use of force to get some-one to change their mind or 'co-operate', i.e., gave them a bull dose to change their mind. I have no idea who first applied the term to a crawler tractor fitted with a blade but it seems to have been in pretty common usage in that context by the early 1930s.

Prior to the appearance of the crawler tractor fitted with a blade, earthmovers in the 1880s and onwards used a frame with a wooden blade at the front, into which were harnessed 2 horses or mules. This device was used to push dirt over an edge or drop-off. The pushing forward was apparently the easy part. Getting the animals and the frame turned around or backed up for the next push was another story. - Deas Plant.

Most often, bulldozers are large and powerful tracked engineering vehicles. The tracks give them excellent ground hold and mobility through very rough terrain. Wide tracks help distribute the bulldozer's weight over large area (decreasing pressure), thus preventing it from sinking in sandy or mud]]dy ground. Extra wide tracks are known as 'swamp tracks'. Bulldozers have excellent ground hold and a torque divider designed to convert the engine's power into dragging ability , letting the bulldozer use its own weight to push very heavy things and remove obstacles that are stuck in the ground. The Caterpillar D9, for example, can easily tow tanks that weigh more than 70 tons. Because of these attributes, bulldozers are used to clear areas of obstacles, shrubbery, burnt vehicles, and remains of structures.

Sometimes a bulldozer is used to push another piece of earthmoving equipment known as a "scraper". The towed Fresno Scraper, invented in 1883 by James Porteous, was the first design to enable this to be done economically, removing the soil from the cut and depositing it elsewhere on shallow ground (fill). Many dozer blades have a reinforced center section with this purpose in mind, and are called "bull blades."

The bulldozer's primary tools are the blade and the ripper.

The ripper is the long claw-like device on the back of the bulldozer. Rippers can come singly (single shank) or in groups or two or more (multi shank rippers). Usually, a single shank is preferred for heavy ripping. The ripper shank is fitted with a replaceable tungsten steel alloy tip.

Ripping soil lets the ground surface water be broken into small bubbles easy to handle and transport, which can then be removed so grading can take place. Agricultural ripping lets rocky or very hard earth be broken up so otherwise unploughable land can be farmed. For example, much of the best land in the California wine country consists of old lava flows. With heavy bulldozers such as the Caterpillar D9 and the Caterpillar D11 the lava is shattered, allowing agriculture. Also, hard earth can be ripped and decompacted to allow planting of orchards where trees could grow.

The bulldozer blade is a heavy metal plate on the front of the tractor, used to push objects, and shoving sand, soil and debris. Dozer blades usually come in four main varieties:

In recent years, adaptations of the angling blade have featured power angling and power side-to-side tilting of the blade on the move by the use of hydraulic rams. These blades are commonly called 'power angle and tilt' (PAT) blades and are most commonly fitted to smaller crawlers used for clean-up and finishing work.

In military use, dozer blades are fixed on combat engineering vehicles and can optionally be fitted on other vehicles, such as artillery tractors like the Type 73 or M8 Tractor. Combat applications for dozer blades include clearing battlefield obstacles and preparing fire positions.[1]

Bulldozers have been further modified over time to evolve into new machines which can work in ways that the original bulldozer cannot.

One example is that loader tractors were created by removing the blade and substituting a large volume bucket and hydraulic arms which can raise and lower the bucket, thus making it useful for scooping up earth and loading it into trucks.

Other modifications to the original bulldozer include making it smaller to let it operate in small work areas where movement is limited, such as in mining. A very small bulldozer is sometimes called a calfdozer: see images at [1] [2] [3] [4]

Other adaptation include, extending the blade in width or hight and curving it to carry more material such as coal. Garwood Industries built special coal blades for the Euclid twin dozer.

Nevertheless, the original earthmoving bulldozers are still irreplaceable as their tasks are concentrated in deforestation, earthmoving, ground leveling, and road carving. Heavy bulldozers are mainly employed to level the terrain to prepare it for construction. The construction work, however, is mainly done by small bulldozers, excavators and loader tractors.

Retrieved from "https://tractors.fandom.com/wiki/Bulldozer?oldid=179539"
Community content is available under CC-BY-SA unless otherwise noted.