Bray Construction Machinery Limited company was based at Feltham in Middlesex and later at Tetbury in Gloucestershire.They were pioneers in building add-on equipment for several other early Tractors and Crawler tractors. Most machines being based on Ford skid units, with some other models using County Tractors 4WD conversions as a donorbase. From the early 1950s onwards Bray developed and produced their original equipment such an small range of several tractors and a large range of industrial loaders of many sizes often fitted with 4WD on most of their machines together with a few early 4X4 ADT prototypes were also made. The Bray company was taken over by another similar manufacturer called Matbro Limited in 1973. Both firms then merged and have worked together closely ever since and operated from four sitelocations until the early 1990s.

BRAY was founded by W.E.Bray in 1911 as Ironsmith toolbuilders from a disused empty warehouse moving on to build and supply parts for motor torpedo boats during WWI to keep business active during the conflict. Gradually by the early 1940s Bray started to develop wheeled diggers and became specialists in construction and earthmoving equipment ever since under the tradename of Bray Construction Equipment Company Limited of Feltham near London as they were known from 1936. There was NO Connection to William Bray Limited (1857-1867) an earlier company from New Cross in South London who were shortlived builders of farmtrailers, steam rollers and traction engines.

By 1934 Bray had built its first hydraulically operated machine called the Angledozer a crawler tractor their first original earthmover. Supplying the MOD (Ministry Of Defence) department with 18 units during the WW2 all of them with Ford Tractor mechanicals some going to France and Middle East. It was later much improved both mechanically and hydraulically along the years it was made.

In 1946 they built their first loading shovel on a David Brown tractor unit. They then developed the all new Hydraloader model this time based on a Fordson E27N Major skid unit in 1949. The Angledozer in heavyduty model was fitted to the County CFT Crawler and it became known as Braydozer which proved popular with farmers and sold in their thousands, with a number of these exported to all over Europe where they were mostly used for agriculture and farmyard work.

Later they moved to a brandnew factorysite at Faggs Road in Feltham, Middlesex in 1950 where every new Bray model assembly and manufacturing was done giving Bray the chance to develop a fresh new range.Their modern factory had just launched the new light Bray BL Series and their yard premises were beside London Heathrow Airport´s grounds. Famous car name called Aston Martin Lagonda Ltd were producing the lovely DB-Series nearby in the same estate.

In 1954 a new model called the Bray Dualoader was introduced and this loader could allow its bucket to pass it over the driverscab to discharge its load faster. A year later Bray Construction Equipment Ltd was taken over by machine attachment and parts specialist manufacturer called Sheepbridge Engineering Ltd who also worked with several other earthmover manufacturers operating mostly from other parts of Europe.

In 1956 the new Bray Hydraloader model was launched and was available as in bulldozer, loader, tractor, yardcrane, forklift and snowplough versions. They were also fitted to several Roadless and County built versions of the Fordson Tractor. A Half-track Hydraloader was introduced on a Fordson Major fitted with Roadless DG Halftrack bulldozer type gear promoted to use it as a prototype new model for other UK brands another first for Bray.

By 1958 Bray were also the UK agents and suppliers for the American firm Sherman Products Inc. of Royal Oak based in Michigan who are bulldozer and tractor parts specialists. Bray acquired a licence to produce their S-P Digger backhoe excavator which was fitted to a new model the Bray Longford Digger of 1960, itself based on a redesigned Fordson Major 4WD tractor resembling an early JCB 4WD Diggerloader with AWD axles, front loader and backhoe digger.

In March 1971 Bray relocates from Middlesex to Tetbury in Gloucestershire where Matbro Limited made their own original construction machinery based on a large 100,000 sqm sized factory on a new 10 acre site at London Road their main manufacturing center for most of their largest earthmoving equipment. Besides this large factory at Tetbury, Matbro Limited had earlier opened and owned since 1951 another two smaller factories in Surrey, one at Horley used for diggers and farmtractors production and a second one at Wallington used for forklifts and garden tractors production. Later Bray quitted tractor conversions for other makes and focused solely on their current 1960s generation original new loader range. Soon after BRAY were renamed Bray Construction Machinery Ltd now fully active at Tetbury with a new modern factory opposite to their later owners Matbro Limited.For a long while Bray still used their Feltham factory to build their large and heaviest models the PS Series. Around the mid 1960s to late 1970s AWD Ltd of Camberley the famous wellknown British vehicle allwheeldrive conversion specialist was their regular supplier of heavy 4X4 axles for the BRAY biggest models.

Bray company was later sold to Matbro Limited in November 1973 after a successful merger of both specialists and the Bray Feltham factorysite was later sold to their former owners Sheepbridge Engineering Ltd who wanted another recent factory for their own production of machinery parts. The designation BRAY was still in regular use in the 1970s and the 1980s with new models now renamed as Bray-Matbro around this time Bray no longer had their own factory widely used for producing their range in the 1980s beside Heathrow Airport.

After that Bray was now under the Matbro Limited ownership and fullcontrol. Their owners were finally able to redevelop and relaunch a whole new generation batch of loaders and forklifts in the 1970s. Matbro Limited using Bray advanced experience and technology, they redesigned and heavily modified their entire model range using new extras such as centerpivot steering, new hydraulics, 4WD with 4WS (four wheel steering) and new power steering. Once this begun Bray earned some ideas too so they precisely the same with a another reorganized completely brandnew generation of loader models in four groups: the PS-Series, the 500-Series large ones and the AG-Series, the RS-Series single axledriven smaller ones. Bray also introduced other new models in prototype form that were still under development: The new Bray T100 4WD pivot-steered forestwork tractor of which 6 were made and also a completely different new model the Bray D120 4WD their first ever experimental original ADT articulated dumptruck meaning D for Dumptruck and the 12 meant it carried any 12 ton loads of which 6 exist. The time was the late 1970s when these two new models were launched while the Bray loader production kept growing normally alongside the MATBRO model production.

Since early 1974 Matbro Mastiff diggers and Matbro Ram forklift handlers of Bray inspired design but built entirely by Matbro Limited were launched. Most of these were of 4WD type but some other models were available in either front or rear wheel drive forms and these had front or rear steering depending on the models. By the early 1980s every model manufactured by Matbro Limited was often rebranded carrying the famous words Matbro-Bray on the units whatever the machines were to avoid mistakes with Bray similar model range until the early 1990s.

Both Bray and Matbro had a long choice of running gear and mechanicals to move their earthmovers and were sourced from a variety of wellknown makes such as Cummins, Ford, Leyland, Perkins and even Volvo engines for the heaviest and biggest models and many other transmission components for each of these two manufacturers model ranges.

Matbro Limited company were themselves taken over in 1991 by UK independent firm called Powerscreen International based in Lisburn Northern Ireland, a general mechanical engineering big firm. After the take-over, output production has increased nearly tenfold and with the Tetbury factory running at full capacity, Matbro then managed to open another new factory in Belfast Northern Ireland for production of the latest hydraulic large Matbro 4WD forklifts. When Bray company closed their own modern recent factory made the popular Matbro TR250 4WD Digger and Matbro TS270 4WD 4WS Loader/Forklift updated versions were made plus a few other models at Tetbury.

Unfortunately the early 1990s brought an end too for centenary and historic BRAY brandname the original manufacturer that started in 1911 and had a remarkable life until the early 1990s when some problems emerged partly by the arrival of other similar but far superior earthmoving equipment makes and partly caused by falling Bray slowsales.Their owners Matbro Limited were stuck in a critical status at the time and that firm could no longer afford to support or attempt to save their older sister BRAY because Matbro only just had little capital. Sadly by May 1991 Bray had a quiet departure and marked the end for our once great and famous manufacturing name of BRAY and left the earthmovers market soon.

Meawhile Matbro Limited were also struggling hard to keep manufacturing active and their own daily production with their latest modern and updated model range they created at that time consisting of 5 different big loaders, 4 different telescopic handlers and 3 different Teleshift forklifts. All of these are powered by the latest modern Cummins, Leyland and Perkins 6 cylinder powerful TDI engines. Some models carry automatic gearboxes and the majority of them have standard factory built 4WD/4WS axles or in 4WD only, with standard go anywhere large wheels and power steering with latest hydraulics and fitted with new noise-reduction cabs with new chassis. They all sold in great numbers in the 1990s.

Finally the giant American earthmover manufacturer called Terex bought the remnants of Powerscreen International following this company closure in 2003 and used this factory for the assembly and for building new giant go anywhere Terex Mobilecranes. Occasionally used BRAY and MATBRO models turn up for sale everyday on the Internet and at Plant sales all over the UK proving how popular they were and still are today but several are seen in constant use now.

Large and even bigger original loader model range fitted with 4WD are:

Medium sized and original loader model range but without 4WD/4WS are:

There are a few Bray Nuffields 4WD that exist on classic and vintage tractor shows and on the rally circuit, but as only a few were built they are quite rare. At the same time plenty of original BRAY PS Series and 500 Series loaders survive still and are in regular use in constructions, farms, mines and quarries all over the UK. Youtube also provides some original videos of several BRAY PS Series being used in many tasks and another video shows a Swedish farmer named Carlipc driving and starting his classic yellow BRAY 570 4WD loader in a farm being used for snow removal and general farmwork. Its frequently used all over the owners property though its an old model and it still works nicely. 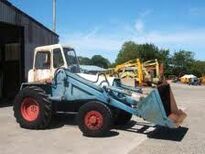 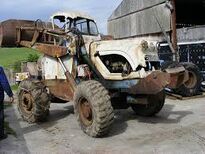 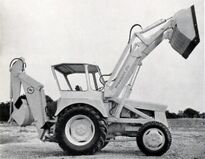 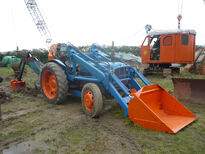 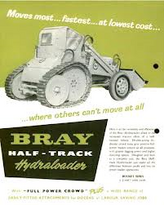 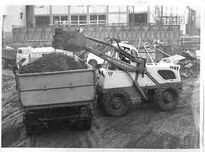 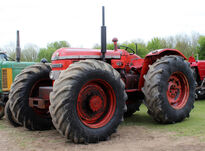 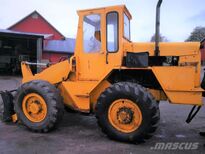 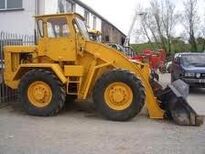 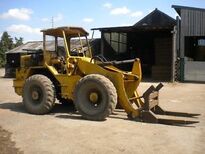 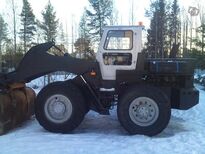 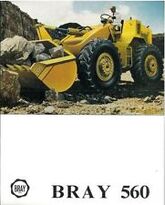 A 1980s Bray 566 4WD Turbodiesel Loader with a Bedford lorry 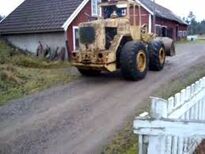 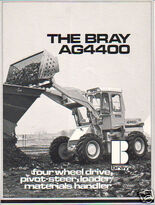 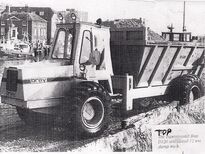 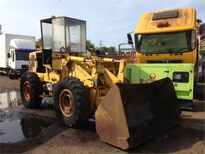 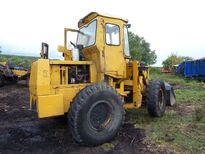 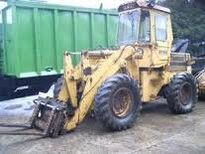 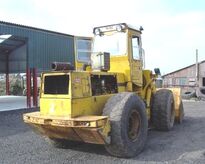 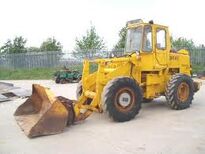 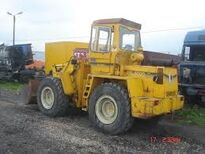 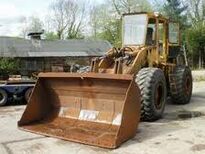 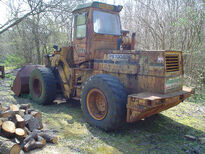 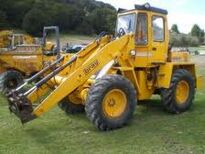 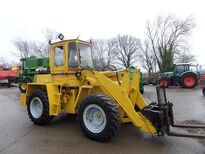 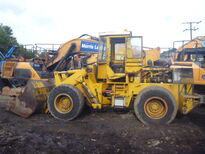 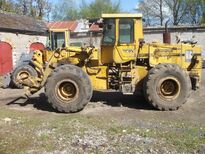