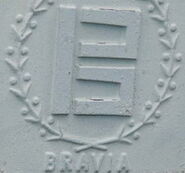 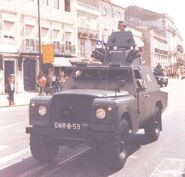 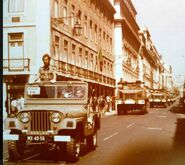 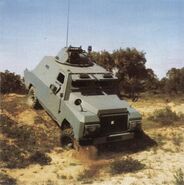 Bravia was a Portuguese vehicle manufacturer a specialist in offroad lorries of many types. It started by reconditioning US Army and Allies wartime military vehicles like the Dutch FTF firm begun, and later made its own original trucks starting its own production in 1964 becoming an independent manufacturer in its own right after that. Its best known model is the wheeled APC Bravia Chaimite of which many are still in use. BRAVIA started life with Brazilian engineering with Portuguese investment and the firm had Engesa former employees who developed and produced offroad military vehicles. BRAVIA production in Portugal ended in 1996 but continues today under the name of ENGESA Engenheiros Especializados S.A. firm based in Sao Paulo, Brazil who have since then bought BRAVIA SARL from Portugal completely in the 1990s.

BRAVIA SARL was a Portuguese manufacturer of original military vehicles and allterrain vehicles from Avenida Engenheiro Duarte Pacheco Nº21 at Amoreiras in Lisbon that started in early 1963 from a technical jointventure project between Brazilian invested capital and Portuguese mechanical engineers who wanted to include Portugal as a country that produced its own true offroad vehicles with support of ex-ENGESA company staff of Brazil and its engineering employed but needed a major supplier of suitable running gear and engines for their vehicles. Another BRAVIA subsidiary company was created in 1964 called VM-VEICULOS MOTORIZADOS S.A. based in Porto Alto near Samora Correia in the Setubal peninsula an important motorvehicle assembling center, VM firm itself were specialized in trailers, towingtugs, sitedumpers and light tractors who were contracted to provide some technology and further mechanical construction or assembling models.

In the 1960s the US Army built a military airfield in the Azores Islands which are part of Portugal and its Military forces placed an order of 100 US Army KAISER-JEEPS for their use and they chose BRAVIA SARL of Lisbon to assemble for them their new JEEPS with most of the parts being ordered from the USA and were powered by Spanish Barreiros Diesel running gear as it was the closest and easiest engine donor for BRAVIA to power these Jeeps as they also carried EBRO parts. These vehicles of course were genuine KAISER-JEEP WILLYS 4X4 M-201 series but better known as the BRAVIA-JEEP M201 4X4 DIESEL and by the 1970s around 120 units of them were built either for general military use or for civilian use, these JEEP variations were very similar to the Spanish license built VIASA-KAISER-JEEP made in Zaragoza, these were also made under the EBRO brandname of Barcelona of the same decade, just the chassis numbers and other minor smaller details were different from each other.

From the 1970s BRAVIA started to develop its own brand new range of armytrucks that were clearly inspired by older existing American lorrybrands like DIAMOND, DODGE, GMC and REO military vehicles. The main difference was that the new BRAVIA lorries were originally developed by former ENGESA company engineers and designers powered by American Cummins and GMC mechanicals for their first prototypes that were made. Of which one model was called the BRAVIA Gazela 4X4, another was the BRAVIA Pantera 6X6, followed by the BRAVIA Leopardo 6X6 and the BRAVIA Elefante 6X6. All of them were available with a choice of Cummins, GMC, Dodge, Pegaso and also Ebro for the lightest model of the range the BRAVIA Comando 4X4. The last prototype model of the 1980s that BRAVIA showed and was later manufactured was called the BRAVIA Tigre 6X6 Armoured Personel Truck intended as a new warfare defensive vehicle for the Portuguese and Spanish Army of which around 20 of them were made but because of its overweight, it wasn't that successful.

The first BRAVIA true offroad truck was launched in 1975 and this was the BRAVIA Gazela 4X4 that was available with EBRO chassis, 4X4 axles and other parts. The engine was better known and already used in popular Barreiros tractors of the 1970s that EBRO assembled too and this became the smallest BRAVIA lorry model with EBRO-BARREIROS Diesel engine fitted and could also be available with a GMC straigtsix petrol engine similar to another model called the Chaimite APC 4X4 model that it carried. Commonly used as a rugged armytruck and could carry up to 3 Ton loads plus a crew of 2 people inside plus its own cargo.

More successful in the HGV category for BRAVIA was the more popular BRAVIA Leopardo 6X6 that became an instant sales champion model, found more commonly disguised as a Firetruck/ Fire Engine and others being used as a Forest Truck or a Towtruck, because it featured a light 6X6 chassis, its power came from a Cummins Straightsix engine with 6 speed transmission, it could carry 3 to 6 people inside and could be driven and taken anywhere. Today there are quite a few around and still popular around the big towns.

Another popular lorry model was the BRAVIA Pantera 6X6 this was a larger and longer, derivative having the same designlayout called a convetional type, but it used a more powerful Cummins TD with a new 6 speed transmission and a 3 seater cab, popular as a 6WD Dumptruck, Quarry lorry and Minetruck using the name Pantera Obras 6X6 with larger offroad axles and bigger wheels. Many of these were also required to work as machinery recovery truck or even as a heavy towtruck for the Army. This model was mostly based on the American Diamond-REO 6X6 but was fitted with new 1980s Diesel mechanicals.

The last truck that BRAVIA made was the heavy BRAVIA Elefante 6X6 that was either supplied with a choice of a Cummins TD engine, a GMC V8 Diesel or a Diamond Diesel straightsix engine all of which used a 6 speed manual gearbox. Very much inspired by another WW2 armytruck no other than the popular American GMC CCKW 6X6 multi-purpose truck that was used for just about anything needed, but it revealed not so much popular as the Leopardo and Pantera that sold much better, however this Elefante model had an original 6X6 chassis and other several new parts fitted.

Later on BRAVIA SARL firm also developed and built their own lighter models, starting with another less popular model called the BRAVIA Comando 4X4 a light patrol armoured car that resembled very much like a 1970s SHORELAND-LANDROVER 4X4 made orinally in Ireland but because this BRAVIA Comando 4X4 was steelplated all-around it was heavier and slower than other similar models at the time. Intended as a Antiriot and Security, or Police Control and Civilian Protection vehicle they were soon acquired by the Portuguese MOD, Military, Police and many found use for the Portuguese and Spanish Army while other modified versions were later used as Valueble Carriers and Money Transporters units such as for Bank and Vault work.

Back in the 1970s BRAVIA SARL with partner VM S.A., both had also developed and built their own original range of light tractors, towingtugs, and sitedumpers all of these were powered by standard Kubota and Yanmar Diesel engines. Japanese Kubota running gear were ordered from Spain that were license-made by Barreiros, these were also distributed by the EBRO company for the Iberian Peninsula market. Those days BRAVIA would then assemble these such machines, while VM were actually producing them at their Porto Alto factory since the mid 1960s and later. Every year at the FIL Automobile Motoshow held near Belem in Lisbon, under the new designation of BRAVIA-VM, they would have their own showstand and the firm showcased in 1976 six new different models of BRAVIA-VM current production. They would normally show one or two different 4X4 or 6X6 new lorries and the other machines were 2 new sitedumpers or 2 new towtugs depending on the year of this important FIL Autoshow Lisbon event.

Their last original model was the very famous 1960s BRAVIA Chaimite APC 4X4 a military model that was entirely developed by BRAVIA using many VM components in its construction that was the most mass produced BRAVIA vehicle so far and it usually carried the designation BRAVIA-VM V200 as per series production, soon followed by BRAVIA-VM sitedumpers (commonly incorrectly called "dumptrucks" sometimes). The BRAVIA Chaimite was a large APC model that would carry up to 12 soldiers inside an offroad vehicle that could carry armour, crew and soldiers with a thick double-plated steelbody shell built on a crosscountry chassis with 4X4/4WS axles with a GMC straightsix petrol engine underneath that provided a long driving range as it had a large capacity fueltank. Around 10000 units of all the BRAVIA-VM Chaimite V-Series were built altogether for the Portuguese Army and other friendly nations.

Unfortunately BRAVIA-VM found some financial trouble in the 1980s and were quickly acquired but rescued by the Portuguese State as the sole manufacturer of military vehicles to secure BRAVIA lifespan, alongside the TRAMAGAL-BERLIET 6X6 Armytrucks that were produced and supplied by the FMAT company who were engaged in assembling and imported many BERLIET, RENAULT, SAVIEM and PORTARO vehicles in CKD kitform to Portugal at the time. From the 1990s BRAVIA were only manufacturing light vehicles and just the BRAVIA Gazela,Leopardo and the Pantera lorry models were being produced. Meanwhile VM acquired part of BRAVIA SARL manufacturing rights and the Lisbon their factory was soon closed as it became small and unsuitable for VM, so all production was moved to much bigger VM S.A. more modern premises at Samora Correia where it kept the BRAVIA-VM active. Later, the ENGESA group of Brazil then acquired the remaining BRAVIA prototypes, tooling, modelplans and its stocks with its firmshares and were closed in 1996 bringing a sad end for the once important BRAVIA company in Portugal.

Not quite the end yet as BRAVIA-VM are still in business today, when a private engineering group called Metalomecanica ASV S.A bought the VM S.A name in 1997 and are currently manufacturing sitedumpers and light tractors today powered by new modern Yanmar or Kubota mechanicals while VM S.A. has enlarged its factory capacity and grew its model range now. Production models have included VM forklift trucks and VM towing tugs together with the now called ASV-VM 4000 4X4 for the light tractors and also the ASV-VM 5000 4X4 for the sitedumpers, which include some options like allwheel drive and/or all wheel steering with or without closed cabs or open roofless cabs and these are all hydraulic, employing modern technology often fitted with self loading buckets provided for the sitedumpers, very similar to the Spanish UROVESA 4X4 and AUSA 4X4 models of very similar type. Exports to the huge UE Automarket for the new ASV-VM model range are underway.

Retrieved from "https://tractors.fandom.com/wiki/Bravia_(vehicles)?oldid=174311"
Community content is available under CC-BY-SA unless otherwise noted.