The Bond Bug was a small British two seat, three wheeled sports car of the 1970s. Following the purchase of Bond Cars Limited, Reliant commissioned Tom Karen of Ogle Design to design a fun car. The Bond Bug was built from 1970-1974 and today has a cult following.

The car was designed by Tom Karen of Ogle Design for bonds new owners Reliant. It was a wedge-shaped microcar, with a lift-up canopy and side screens instead of conventional doors. The Bond Bug was based on Chief Engineer John Crosthwaite's newly designed chassis[4][5] and some Reliant Regal running gear. The original concept was explored by chopping down a production Regal vehicle. This prototype could be seen, abandoned, in the yard at Tamworth, for many years later.

The engine was the front mounted 700 cc (later uprated to 750 cc) Reliant light-alloy four cylinder unit which protruded into the passenger cabin. At launch 29 bhp was claimed for the less expensive 700 and 700E models. The more up-market 700ES incorporated a redesigned cylinder head which permitted the compression ratio to be increased from 7.35:1 to a slightly less modest 8.4:1.[3] This provided a power increase to 31 bhp as well as improved torque for the then range topping 700ES.[3]

The Bond Bug 700ES also offered more supportive seats as well as more padding over the engine cowl, twin mudflaps, an ashtray, a rubber front bumper and a spare wheel.[3]

The car enjoyed an upbeat launch, at which Reliant's Ray Wiggin stated:

The fact it has three wheels is quite incidental. It's a new form of transport. So now, in fact, we think it's going to appeal to a much wider section of the market than we originally envisaged.[3]

The Bug was available in a bright orange tangerine colour, although six white Bugs were produced for a Rothmans cigarette promotion, one of which was also later used in an advertisement for Cape fruit. Its fame was helped along by a distinctive Corgi Toys die-cast toy car. Although it had a fairly short production run (1970–1974), it has a fanatical following today, is much sought after by collectors, and has an active and enthusiastic club.[citation (source) needed]

In contrast to the stereotypical image of three-wheeled Reliants as being ridiculously slow, the Bond Bug was capable of some 78 mph (126 km/h). This compared favourably with a number of four wheeled sports cars of the same era.[citation needed] The car was, however, not cheap. At £629 it cost more than a basic 850 cc Mini which was at the time £620. Throughout the new millennium the car has enjoyed an increased following through publicity with appearances from stars such as Robbie Williams in the Millennium promo and the infamous 118 guys.[1]

Bug Trivia: Tom Karen also oversaw the design and production of Luke Skywalker's landspeeder from Star Wars: one of the models was built upon the chassis of a Bond Bug - the wheels hidden by mirrors at 45° to the ground. 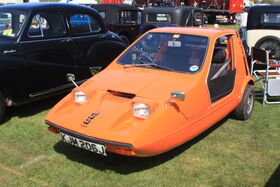 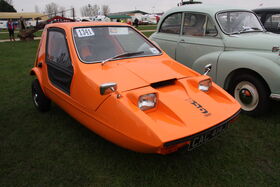