For the 2010 model year, the All American underwent a major design change. The 2010 model (internally designated "D3") bears little resemblance to the previous design ("A3"), which was introduced in 1999. Previous updates to the All American were done in 1989, 1977 (due to changes in school bus safety standards), and in 1962.

The Blue Bird All American was created as the design of schools in the U.S. education system changed immediately following World War II. Additionally, the baby boom generation caused a large increase in the demand for school buses in transportation. In rural communities, one-room schools were phased out in a nationwide movement in the US to consolidate schools into fewer and larger ones, facilitating graded class structures. This meant that fewer students were attending school in their immediate neighborhoods, particularly as they progressed into high school, and the previous practice of walking to school for many became impractical.

Company founder Albert Luce Sr. saw a design for a flat front bus at the 1948 Paris Auto Salon. Blue Bird Body Company developed their own transit-style design later that year which evolved into the Blue Bird All-American, often considered among one of the pioneering designs that gained widespread acceptance for transit-style school buses in North America. However, the first school bus manufacturer to design that type of school bus was Crown Coach Corporation. Crown designed their Supercoach in 1932 and had redesigned it in 1948; with minimal updates, the 1948-style Supercoach remained in production for 43 years (until Crown's 1991 demise).

At the 1948 Paris Auto Salon, Albert L. Luce, the owner of Blue Bird Body Company, saw a forward-control bus based on a GMC chassis. After the show, Luce brought back to Fort Valley, Georgia, a fully built forward-control bus produced in Belgium because he was unable to secure a supply of GMC chassis in order to produce bodies. The chassis for the first All Americans were conversions of conventional truck chassis, a common practice of the time.

In 1952, Blue Bird became the first school bus manufacturer to produce its own chassis rather than rely on outside suppliers for the All American. Not only was the chassis produced in-house, but rather than modifying a truck chassis, it was designed from the ground up as a bus chassis. In the late 1950s, the All American's body and chassis were redesigned with flatter sides and a taller roof; quad headlights, a signature of the All American, were also added. In 1962, a taller and wider windshield was added. All of these changes were passed onto the Blue Bird Conventional and the basic body shape would stay unchanged for nearly 50 years. In 1963, the front-engine version of the All American was developed into an high-end recreational vehicle, the Wanderlodge. The Wanderlodge gained a reputation for its hand-crafted interiors as well as its all-steel construction. As did all school bus manufacturers, Blue Bird upgraded the All American during the 1970s to pass the more stringent school bus safety standards for 1977 with stronger bodywork and higher, padded seats. The 1970s also saw the introduction of diesel engines as Blue Bird sought to increase the All American's fuel economy as well as better compete against West Coast manufacturers. As the front-engine version of the All American proved more popular than the rear-engine version, the rear-engine chassis continued to be outsourced (typically to International Harvester). In 1988, Blue Bird introduced its first purpose-built rear-engine chassis for the All American. Today, all Blue Bird buses (with the exception of the Micro Bird) utilize a Blue Bird chassis.[2]

Coinciding with the introduction of Blue Bird's TC/2000 for the 1988 model year, the All American received its own extensive upgrades for 1989. Inside, the driver's compartment was completely redesigned with a modern instrument cluster and a smaller engine cover for front-engine models. Entry doors gained more visibility through the use of larger glass panels (a feature later adopted throughout the Blue Bird lineup). The most visible changes were focused on the front end. Although not as simple as the TC/2000, the amount of chrome from the grille was pared down significantly. Also, the vertically stacked round headlights (in use since 1964) were replaced by horizontally mounted rectangular headlights. To improve serviceability, Blue Bird made a number of the front body panels removable for general maintenance.

Another change that this generation of All American marked was its name used in export markets; to bring it in line with the TC/2000, the All American's export name changed to the Blue Bird TC/3000. Previously, Canadian exports (the largest market outside the United States) were re-branded as Blue Bird All Canadians.

Much like its ancestor, the 1989 All American would change little over its production run. However, Blue Bird became the first school bus manufacturer to offer a school bus with a compressed natural gas (CNG) powertrain. CNG-fueled All American REs first became an option in 1991.[3]

In 1999, Blue Bird introduced a new generation of the All American, code-named "A3". Although the All American FE was sold alongside the TC/2000 and TC/1000, the 2000 All American RE served as a successor to the rear-engine TC/2000. The TC/2000 also donated its larger windshield to the All American. This was a change that necessitated a smaller grille (on FE versions); the Blue Bird lettering moved from above to below the grille in between the headlights.

Structurally, the All American A3 FE differed from its predecessor (and from all other front-engine school buses); the A3 FE marked the debuted the design of the "dropped" front frame. The front portion of the frame rails were designed lower than the rest of the frame. Consequently, that reduced the size of the engine housing and its intrusion in the driver's compartment. The driver's compartment also received a redesign of the instrument and control panels from the 1989-1999 generation.

Throughout its lifespan, the A3 All American changed relatively little. However, it came at a time when Blue Bird significantly trimmed its transit-style bus lineup. In 2001, the TC/1000 was removed from production and the last TC/2000 was produced in 2003. As such, at the end of its production life, the two A3 All Americans were serving the customer base initially served by five buses when the A3 was introduced. Although no longer marketed as school buses, Blue Bird still produces the A3-generation All American primarily for export as well as for GSA orders.

The new-generation 2010 All American, known by the code name "D3", was unveiled at an industry trade show in Myrtle Beach, South Carolina on October 28, 2008.[4] The exterior features the most extensive changes to the All American's body design in nearly 50 years.

A notable feature of the D3's redesign was the design of the headlights: the 2010 All American is the first version since the 1950s to have dual headlights instead of quad headlights and it is the first All American to have round headlights since 1988. Inside, the driver's compartment was completely redesigned for better visibility and ergonomics.

Other changes were intended to make the D3 more passenger-friendly; the D3's roof has squared-off corners to increase headroom while standing up and a flat floor is available as an option in front-engine models. Both of these designs were influenced by the TC/1000 of 1997-2001.

When Blue Bird had a manufacturing facility located in Guatemala (Blue Bird Central America), the All American body was produced. The All Americans produced in South America differed from those in the United States in that they utilized locally available truck chassis (Ford, Mercedes-Benz, and Hino) instead of the in-house Blue Bird chassis. These buses were used for both student transport and mass transit. Blue Bird ended bus production in Guatemala in the early 1980s.

The Blue Bird CS (Commercial Series) is a commercial transit bus derived from the All American product line. During their production runs, the TC/2000 and TC/1000 also had CS derivatives of their own. Due to its high parts commonality with the school bus line, the CS is the only commercial bus product Blue Bird still manufactures in its focus on school buses. Currently, Blue Bird has not designed a transit bus variant of the D3-generation All American. 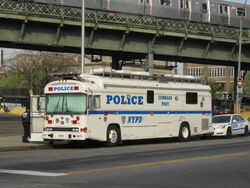 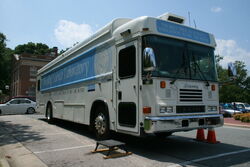 Mobile Science lab
The All American is available as a specialty vehicle for a variety of uses.

Wikimedia Commons has media related to:
Blue Bird All American

Retrieved from "https://tractors.fandom.com/wiki/Blue_Bird_All_American?oldid=175317"
Community content is available under CC-BY-SA unless otherwise noted.