The Black Country Living Museum (formerly The Black Country Museum) is an open-air museum of rebuilt historic buildings, located in Dudley in the West Midlands of England. The museum occupies a 105,000 square metres (26 acres) urban heritage park in the shadow of Dudley Castle in the centre of the Black Country conurbation. It was first opened in 1978, on land partly reclaimed from a former railway goods yard, disused lime kilns and former coal pits, and since then many more exhibits have been added to it.

The Museum preserves some notable buildings from around the Metropolitan Boroughs of Dudley, Sandwell and Walsall and the City of Wolverhampton; mainly in a specially built village. Most of the buildings are original, relocated from their original sites. As a living museum, these form a base from which volunteers portray life in the nineteenth and early twentieth centuries.

The Museum is constantly evolving as new exhibits, especially buildings in the village, are being added.

A prominent landmark on the Tipton Road passing the main entrance is the frontage of Rolfe Street Baths, relocated from Smethwick. To the left of the main entrance is a more conventional exhibition area with displays of a number of artefacts made in the Black Country. This includes not only machinery but, various kinds of vehicles, and the iron products which are a major feature of Black Country industry. It also includes more fragile items such as glassware, reflecting the centuries old industry of lead crystal glass production as well as the Joseph Chance glass works between Oldbury and Smethwick.

Electric trams and trolleybuses transport visitors from the entrance in a re-created factory to the village area with thirty buildings situated by the canal basin. The museum is one of only three in the UK with working trolleybuses, the others being The Trolleybus Museum at Sandtoft and the East Anglia Transport Museum near Lowestoft. Nearby Walsall retained its trolleybuses until 1970. The village is only a short walk from the main entrance, passing the Newcomen pumping engine and Fun-Fair.

Coal mine displays include underground workings, colliery surface buildings and a replica of the 1712 Newcomen steam engine. In all, forty-two separate displays have either been re-erected or built to old plans to create a living open air museum.

Visitors to the museum may also take a narrowboat trip on the adjacent canal, into the Dudley Tunnel.

Located by the main entrance is the exhibition area with an introduction to the Black Country and a selection of local artefacts. The BCLM is close to the site where Thomas Dudley first mastered the technique of smelting iron with coal instead of wood charcoal and making iron which was pure enough for industrial use. Thus having a claim to be the birthplace of the industrial revolution, the Black Country is famous for its wide range of steel-based products from nails to the anchor and anchor chain for The Titanic. A representative range of smaller items are displayed at the BCLM.

The Black Country was home to some early manufacturers of motor cars and cycles, such as Sunbeam. These are represented in the displays. It is affiliated to the British Motorcycle Charitable Trust.[1]

Glass working was a major Black Country industry. One source of skills in decorative glassware was refugees such as the Huguenots, leading to major producers of crystal glassware setting up in the area.

The Village and Old TradesEdit

Houses, shops and public buildings have been rebuilt to create a single early 20th century street, peopled by staff in period costume. A number of the historic trades of the Black Country are also demonstrated.

Some of these buildings are still used in their original function, such as the pub, the sweet shop, the Methodist Chapel and the 'chippy'. Others are faithful replicas of their last use, with goods in the windows. Still others are only shells of the originals, such as the bath house. By immersing the visitor in the everyday objects of life, it becomes clearer how things connected.

While some food products may be sold, modern health regulations forbid the public sampling the delicious traditionally made bread from the village bakery.

A village school shows lessons and school life from the turn of the 20th century. The school building was that of St James's School which opened in the Eve Hill area of Dudley in 1842 for pupils aged 5–11. However, it was an infants school only from 1906 with junior pupils transferring to Jessons School. It was refurbished in 1912 and remained open until July 1972, when it finally shut its doors after 130 years. However, it remained in use for a school for a further eight years as an annexe of the reorganised Jessons Middle School (formerly the junior school) until a new school building opened on the Jessons site in 1980. That was the end of the building as a school after 138 years, but it would survive for another a decade at its Eve Hill site. When Jessons Middle School vacated the building, it was converted into a youth centre before falling short of modern health and safety standards and closing in 1989. The Black Country Museum officials then made the decision to transfer the building to the museum site and the relocation was completed by October 1990, with the exhibit opening the following year.[2]

A short canal branch runs between the school and the main part of the village. This allows the role of waterways in Black Country history to be portrayed. Alongside the canal basin is a forge where chain-making is demonstrated. On the opposite bank there is a boat building yard with several unrestored boats

2010 saw the addition of four 1930s period shops, which had previously existed on Birmingham Road in Oldbury.[2]

A traditional fun-fair is a prominent part of the museum site, located just outside the village, right alongside the school. It includes traditional features, including a helter skelter.

The museum holds a number of themed events each year. 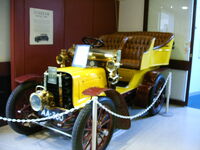 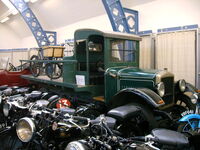 Vehicles on display in the exhibition area. 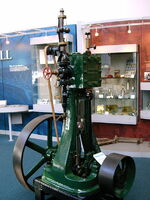 Tangye stationary engine on display in the exhibition area. 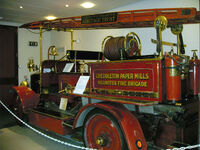 Early fire engine, probably made at the John Marston Co. Ltd. factory in Wolverhampton, which made Sunbeam cars and motor cycles. 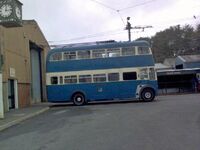 A trolleybus at the museum

1909-built Fellows Morton and Clayton steam narrowboat President, preserved in working order and based at the BCLM
Add a photo to this gallery

Retrieved from "https://tractors.fandom.com/wiki/Black_Country_Living_Museum?oldid=91384"
Community content is available under CC-BY-SA unless otherwise noted.