The R Type is the second series of post-war Bentley automobiles, replacing the Mark VI. Essentially a larger-boot version of the Mk VI, the R type is regarded by some as a stop-gap before the introduction of the S series cars in 1955. As with its predecessor, a standard body was available as well as coachbuilt versions by firms including H. J. Mulliner & Co., Park Ward, Harold Radford, Freestone and Webb and others. Even by this date, there was little difference (other than the radiator grilles and the carburation) between the standard Bentley R Type and the Rolls Royce Silver Dawn, though Bentley was still the more popular marque. The vast majority of cars produced were Bentleys. Some 2,500 units were manufactured during the R Type's run.

During development it was referred to as the Bentley Mark VII. Indeed the chassis cards for these cars describe them as Bentley 7. The R Type name which is now usually applied stems from chassis series RT. The front of the saloon model was identical to the Mark VI, but the boot (trunk) was almost doubled in capacity and the engine increased in displacement from 4.25 to 4.5 litres (as fitted to the later Mark VI). For buyers looking for a more distinctive car, a decreasing percentage had custom coachwork available from the dwindling number of UK coachbuilders. These ranged from the grand flowing lines of Freestone and Webb's conservative, almost prewar shapes, to the practical conversions of Harold Radford which including a clamshell style tailgate and folding rear seats.

Despite its name, the two-door Continental was produced principally for the domestic home market, the majority of cars produced (165, including a prototype) being right-hand drive, with a 43 left-hand drive examples produced for use abroad. The chassis was produced at the Rolls Royce Crewe factory and shared many components with the standard R type. Other than the R-Type standard steel saloon, R-Type Continentals were delivered as rolling chassis to the coachbuilder of choice. Coachwork for most of these cars was completed by H. J. Mulliner & Co. who mainly built them in fastback coupe form. Other coachwork came from Park Ward (London) who built six, later including a drophead coupe version. Franay (Paris) built five, Graber (Wichtrach, Switzerland) built three, one of them later altered by Köng (Basle, Switzerland), and Pininfarina made one. James Young (London) built in 1954 a Sports Saloon for the owner of the company, James Barclay.

The early R Type Continental has essentially the same engine as the standard R Type, but with modified carburation, induction and exhaust manifolds along with higher gear ratios.[3] After July 1954 the car was fitted with an engine, having now a larger bore of 94.62 mm (3.7 in) with a total displacement of 4.9 L (4887 cc/298 in³). The compression ratio was raised to 7.25:1.

A Number of example survive to day owned by enthusiasts along with a number still in use as wedding cars. 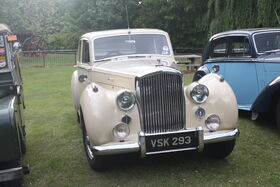 Retrieved from "https://tractors.fandom.com/wiki/Bentley_R_Type?oldid=96935"
Community content is available under CC-BY-SA unless otherwise noted.