Barkas was the East German manufacturer of small delivery vans and minibuses named the B1000.

The van was built in a new factory on the site of the former plant of the Framo (car) company in Karl-Marx-Stadt, the old factory having been crated up and shipped to the Soviet Union as part of a larger war reparations package in the late 1940s. The business had subsequently been nationalized by the GDR government. Karl-Marx-Stadt, named in 1953, recovered its former name, Chemnitz, only in 1990, following German reunification.

B1000 production started in 1961 and continued until 1991. Originally the B1000 was powered by the 45 PS[1] three cylinder, two stroke DKW derived engine found also in contemporary Wartburgs. Shortly before production ceased, model designation was changed to B1000/1, and the old engine was replaced by a 1.3 four-stroke engine manufactured under licence from Volkswagen. The B1000 was a remarkable van at the time; the unusually high loading capacity, two-stroke engine, front wheel drive, and semi trailing arms suspension differed from the more traditionally constructed vans in the West.

Comparisons with the Volkswagen van of the early 1960s were inevitable. Its front-mounted engine made the Barkas easier to load and more variable in its configuration, with space for up to 8 passenger seats.[1] The vehicles were mostly produced for public service applications, with private customer delivery times in the 1960s stretching to heroic levels commonly associated with Trabants, of between ten and fourteen years.[1]

Being the only commercially available van in the GDR the factory offered many body styles; a flatbed, a panel van, a people carrier, a box van and an ambulance were all available. 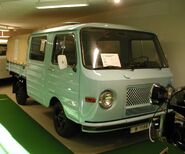 B 1100 prototype
Add a photo to this gallery

Retrieved from "https://tractors.fandom.com/wiki/Barkas_(van_manufacturer)?oldid=184583"
Community content is available under CC-BY-SA unless otherwise noted.