The BMW Z Models traditionally are roadsters manufactured by the German automaker BMW beginning with the Z1. The Z range has been produced in four different series with five generations, including coupe variants, one super car, and one concept.

The 1989 Z1 was a limited production European run for BMW, whereas the 1996 Z3 was the first mass-produced roadster for BMW. The original Z in Z1 stood for Zukunft (German for future). The only current Z model is the second generation of the Z4 series.

Z vehicles can be largely differentiated by the underlying platform:

The BMW Z1 is a two-seat roadster developed by BMW and produced from March 1989 to June 1991.[1] The Z1 featured unusual doors which, instead of opening outward or upward, dropped down into the door sills. Only 8,000 examples of the Z1 were produced.

The Z3 was the first modern mass-market roadster produced by BMW. The Z3 was introduced as a 1996 model year vehicle, shortly after being featured in the James Bond movie, GoldenEye. The entire 1996 BMW Z3 roadster production run, more than 15,000 roadsters, was sold out by the time the car was introduced.[2] There were a few variants of the car before its production run ended in 2002, including a revised tail styling for 1999 and coupé version for 1999, and M versions for both. It was manufactured and assembled in Spartanburg, South Carolina. 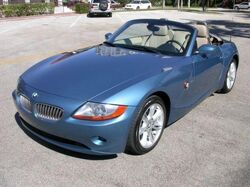 The first-generation BMW Z4 was known as the E85 in roadster form and E86 in coupé form. It was designed by Danish BMW-designer Anders Warming,.[3]

The Z4's design addresses many criticisms of the preceding Z3; the Z4 was larger, and had a significantly stiffer chassis. It was built in Spartanburg, South Carolina. Initially, the Z4 was available only as a roadster, but in 2006 a coupé version was officially launched. The last of the first-generation Z4 to be assembled in North America rolled off the assembly line on 27 August 2008.

The second-generation Z4 was announced on December 13, 2008,[4][5][6] and debuted at the 2009 North American International Auto Show in Detroit the following month. Using a retractable hardtop, the new Z4 replaces the previous roadster and coupe versions for the 2009 model year. The top is made of a two-piece lightweight aluminum shell, and takes 20 seconds to fold up or down.[7] Manufacturing has been moved from the United States to Regensburg, Germany.

The BMW Z8 was a car produced by German automaker BMW from 2000 to 2003. The Z8 was the production variant of the 1997 Z07 concept car, which was designed by Danish Henrik Fisker at BMW's DesignworksUSA in Southern California. The Z07 originally was designed as a styling exercise intended to evoke and celebrate the 1956-'59 BMW 507. The Z07 caused a sensation at the '97 Tokyo Auto Show. The overwhelming popularity of the concept spurred BMW's decision to produce a limited production model called the Z8. 5,703 Z8s were built, approximately half of which were exported to the United States.

The BMW Z9 (or Z9 Gran Turismo, Z9 GT) is a concept coupe introduced in 1999 by BMW at the Frankfurt Auto Show. During the 2000 Paris Auto Show a convertible variant of the Z9 was debuted. The Z9 featured a carbon fiber skin over an aluminum space frame.[8] Much of the styling found on the current E63 6 series is derived from the Z9. The vehicle also featured unique gull wing doors that also opened like a conventional hinged door. The Z9 did not make it into production, but many of its innovations did. The interior included an early concept of BMW's iDrive system, called the Intuitive Interaction Concept.[9] The Z9 featured the world's first V8 turbo diesel, later produced for the BMW 7 Series 740d model.