The first generation BMW X3 (internal designation: E83) is a compact crossover SUV of the German automaker BMW. Marketed below the E53 and later E70, the X3 was presented at the International Motor Show 2003 and is since January 2004 on the market.

All models are equipped with the BMW xDrive All Wheel Drive system, with a default 40:60 torque split between the front and rear axles and has the ability to direct all the torque to either axle.

[] = Values are valid for vehicles with 5-speed automatic (as of 09/2005: 6-speed automatic).
* = In combination with optional Edition Sport, M-Sport package, dynamic packet or certain alloy wheels.

For 2007, the X3 is powered by the N52 inline 6 cylinder engine that debuted on the 2006 E90 3 Series. In 2007 a face lift was given to the X3, including an X-drive update, suspension adjustments, an engine upgrade, and aesthetics inside and out.

As well in 2007 the BMW X3 range extended with smaller engines including the 4-cylinder petrol and diesel option. These options now becoming available to countries across Europe, America, Asia and Australia. 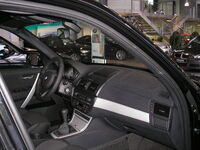 Interior of the modelyear 2007

Since 23 September 2006 the E83 has a facelift. It was last little details on the headlights, the double kidney grill, front bumper, tail lights, the rear bumper, and especially the controversial interior. With the exception of the four-cylinder gasoline engine and the engine range has been revised, most recently in the autumn of 2007, the 2.0 diesel engine. Another engine that 3.0sd with twin turbochargers has been introduced.

Since September 2008, the Edition Exclusive and Edition lifestyle are available. The M-Sport Package is being replaced in March 2009 by the Sport Limited Edition.

The X3 is only slightly smaller than its big brother, the X5 (E53) and features (measured up to the window edge), even greater, at 20 liters of luggage compartment (480 liters). Due to its compact dimensions, it looks sportier and less brawny than its bigger brother, X5.