Tractor & Construction Plant Wiki
Register
Don't have an account?
Sign In
Advertisement
in: All articles with dead external links, Automotive industry by country, Manufacturing in Australia,
and 2 more

A substantial car industry was created in Australia in the 20th century through the opening of Australian plants by international manufacturers. The first major carmaker was the Ford Motor Company of Australia and the first Australian-designed mass production car was manufactured by Holden in 1948. Australian manufacture of cars rose to a maximum of almost half a million in the 1970s (10th place in the World) and still exceeded 400,000 in 2004.[1] Australia was best known for the design and production of 'large' sized passenger vehicles.[2] By 2009 total production had fallen to around 175,000 and the Australian market was dominated by cars imported from Asia and Europe.

As of 2015 Australian-designed cars are made by General Motors subsidiary Holden, and Ford Australia, while Toyota Australia manufactures local variants of its international models, particularly the Camry, but the Ford Australia engine and vehicle plants will close in October 2016 and the Holden and Toyota Australia factories during 2017.[3][4][5] Ford of Australia's design and development facilities remain in operation and are expanding, leaving Australia as one of only a few countries with the capabilities to design and develop mass market cars from scratch.[6][7]

The value of monthly vehicle imports ($millions) since 1988 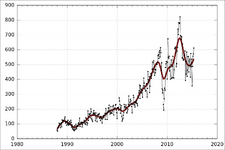 Australian constructors were very active at the very beginning of both car and aircraft development and in some areas, ahead of their overseas counterparts. Due to the isolation of Australia, it was more practical for Australia to make their own cars.[8]

The first true cars made in Australia were steam cars. The first of these steam cars, the Phaeton, was made in 1896 by Herbert Thomson and Edward Holmes of Armadale, Melbourne. It was exhibited in 1900 using the first pneumatic tyres made in Australia by Dunlop. The 5 horsepower single cylinder steam carriage which is now in the Institute of Applied Sciences, Melbourne, was reliable and durable enough to take Thomson and a friend 493 miles from Bathurst to Melbourne at an average speed of 8.7 mp/h.[9]

In 1901, Harley Tarrant produced the first Tarrant automobile, which was the first petrol-driven car built entirely in Australia in a small workshop in Melbourne. Before that, Tarrant had been using the shop to build engines. Tarrant was joined in this endeavour by bicycle maker, Howard Lewis. The car was powered by a rear-mounted 6 hp Benz engine. This car was followed by many improved designs, including the first fully enclosed car body made in Australia. Later models included locally produced components including: engines, gearboxes and rear axles.[8] The sole surviving Tarrant is on display at the RACV City Club, on the chancery level.

Ford Australia is the Australian subsidiary of Ford Motor Company and was founded in Geelong, Victoria in 1925 as an outpost of Ford Motor Company of Canada, Limited. At that time, Ford Canada was a separate company from Ford USA. Henry Ford had granted the manufacturing rights to Ford in British Empire (later Commonwealth) countries (excepting the UK) to Canadian investors. Ford Australia also has a performance car division, Ford Performance Vehicles, with the cars being marketed under the FPV brand. In May 2013 Ford announced that it will end Australian production in October 2016,[12] but will remain as a competitor in the Australian marketplace with imported vehicles.

GM Holden Ltd is an Australian automaker based in Port Melbourne, Victoria. The company was founded in 1856 as a saddlery business, but later moved into the automotive field, becoming a subsidiary of General Motors (GM) in 1931. Holden has taken charge of vehicle operations for GM in Australasia and, on behalf of GM, holds partial ownership of GM Korea (formerly GM Daewoo) in South Korea. Over the years, Holden has offered a broad range of original, locally produced vehicles (such as the Holden Commodore), supplemented by imported GM models. In the past, Holden has offered badge engineered Chevrolet, Isuzu, Nissan, Suzuki, Toyota, and Vauxhall Motors models in sharing arrangements, with Daewoo, Opel, and Isuzu-sourced models sold currently. Holden also has a performance vehicle partner, Holden Special Vehicles, which markets modified Holdens under the HSV brand. In December 2013, Holden announced they would end their local manufacturing operations in Australia in 2017.[13]

Iveco Australia is a subsidiary of CNH Industrial, it currently produces the Iveco PowerStar. It is known for being the only foreign semi truck maker that isn't producing an American branded Conventional semi truck.

Mack Trucks Australia is a subsidiary of AB Volvo and manufacturers semi trucks for the Australian market. It is famous for manufacturing the popular Mack Titan.

On 10 February 2014, Toyota announced that by the end of 2017 they would cease manufacturing vehicles and engines in Australia.[14][15]

Australian Motor Industries produced a range of Standard, Triumph, Rambler, Mercedes-Benz, and Toyota automobiles in Australia between 1958 and 1987.

British Leyland (formerly Morris and BMC) assembled and manufactured vehicles in Australia from 1950 to 1975.

Mitsubishi Motors Australia is a fully owned subsidiary of parent company Mitsubishi Motors Corporation of Japan. Its Australian administrative headquarters are located at Tonsley Park (Clovelly Park, South Australia), with branch offices in Brisbane, Sydney, Melbourne and Perth. The Tonsley Park site was the location of MMAL's vehicle assembly plant, closed in March 2008 when lacklustre sales of the large Mitsubishi 380 confirmed that domestic vehicle manufacture was no longer viable.

Nissan first began assembling cars in 1966, when Pressed Metal Corporation began assembly of the Datsun Bluebird 1300. This deal ended after about a year and a half, however, but by 1968 Motor Producers Ltd. of Melbourne began assembling Datsuns again at their Clayton plant. By 1971 locally assembled cars were to include the 1200 and 1600 saloons, with at least 60% local parts content. A deal lasting until 1976 was signed with Motor Producers.[17]

Nissan Motors themselves then used the Clayton factory to build small four-cylinder cars in the wake of the 1973 oil crisis. Models produced in Australia included the Pulsar, Pintara, and Skyline. By the end of the 1980s however, Nissan was facing financial difficulties and eventually closed down its Australian factories in 1992, becoming strictly a vehicle importer afterwards.

Renault (Australia) Pty Ltd was established in the late 1950s to organise the importation and contract assembly of Renault vehicles in Australia.[18] In August 1966 Renault Australia purchased the assembly facilities of Continental and Genertal Distributors at Heidelberg in Victoria.[18] Models including the Renault 10,[18] 12,[18] 16[19] and 18[20] were assembled and the company also entered into an agreement to assemble cars for Peugeot.[18] Australian production ended with the closure of the Heidelberg plant in July 1981 with LNC Industries then taking over importation and distribution of Renaults in Australia.[18] As of 2012, Renault vehicles are sold in Australia through Vehicle Distributors Australia, a wholly owned subsidiary of Nissan Australia.[21]

Volkswagen Australia Ltd was formed in 1957 by Volkswagen AG of Germany and various Australian state Volkswagen distributors.[22] The company acquired the vehicle assembly facilities of Martin & King at Clayton in Victoria, that site having been used for local assembly of the Volkswagen Beetle since 1954.[22] By 1960 sheet metal pakhfewfhkejwfhgerjlhkjh.hkjnels were being pressed at Clayton and by 1967 the engine and most components were being produced there.<ren Kombi|Kombi]].[23]

Due to falling sales the operation reverted to assembly only in 1968.[22] A new company, Motor Producers Limited was formed and operations were expanded to include Datsun and Volvo models as well as Volkswagens.[22] The factory was sold to Nissan in 1976 and Australian assembly of Volkswagens ended shortly after.[22]

There are a number of current, previous or future small scale producers of cars in Australia, including;

Current or previous tuning or customisation companies in Australia include: