The A35 was a small (compact) car sold by the British Motor Corporation under the Austin marque in the 1950s.

Introduced in 1956, it replaced the highly-successful Austin A30. The name reflected the larger and more-powerful 34 hp (25 kW) A-Series straight-4 engine, enabling a slightly higher top speed and better acceleration.

The A35 was very similar in appearance to the A30, except for a larger rear window aperture and a painted front grille, with chrome horse-shoe surround, instead of the chrome grille featured on the A30. Both had 13 in (330 mm) wheels. The semaphore turn-signal indicators were replaced with present-day front- and rear-mounted flashing lights. A slightly easier to operate remote-control gear-change was provided. Much of the improved performance was a result of different gearbox ratios. The A30 had the first three ratios close together then a big gap to top (4th gear). The A35 ratios were better spaced and gave a max speed in third of 60 mph (97 km/h) against about 45 mph (72 km/h) for the A30.

The A35 was quite successfully raced in its day and can still be seen today at historic race meetings.

Double F1 World Champion, Graham Hill, raced an A35 saloon in the early 1960s. The car was later sold to Frank Williams, a current F1 team owner, who also raced it in the UK.

Quite a few examples exist as they were built in reasonable numbers. There is an active collectors group for the model. 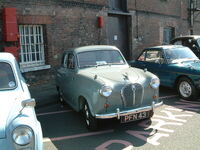 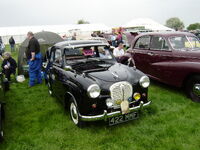 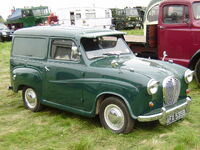 Wikimedia Commons has media related to:
Austin A35