Start a Wiki
This article is about the Audi car. For Audi's 4WD system, see quattro (four-wheel-drive system). For the Audi subsidiary, see quattro GmbH.

The Audi Quattro is a road and rally car, produced by the German automobile manufacturer Audi, now part of the Volkswagen Group. It was first shown at the 1980 Geneva Motor Show on 3 March.[1][3]

The word quattro is derived from the Italian word for "four". The name has also been used by Audi to refer to the quattro four-wheel-drive system, or any four-wheel-drive version of an Audi model. To avoid confusion, the original Quattro model is also commonly referred to as the Ur-Quattro - the "Ur-" (German for "primordial" or "ancestral") is an augmentative prefix, in this case meaning "original", and is also applied to the first generation Audi S4 and Audi S6 models, as in "Ur-S4" and "Ur-S6".

The Audi Quattro was the first rally car to take advantage of the then-recently changed rules which allowed the use of four-wheel drive in competition racing. It won competition after competition for the next two years.[1] To commemorate the success of the original vehicle, all subsequent Audis with their trademark quattro four-wheel-drive system were badged "quattro" with a lower case "q". The original car with the upper case "Q" in the Quattro name is a collector's piece.

The Audi Quattro shared many components and the core of its body style with the Audi Coupé, which was a member of the Audi 80 (B2) model range.[1] It was internally designated Typ 85, a type number it shared with the quattro versions of the Audi Coupé (B2) and Audi 80. Its characteristic flared wheelarches were styled by Martin Smith. The Audi Quattro also had independent rear suspension and independent front suspension.[4][5]

The idea for a high-performance four-wheel-drive car was proposed by Audi's chassis engineer, Jörg Bensinger, in 1977, when he found that the Volkswagen Iltis jeep, could outperform any other vehicle in snow, no matter how powerful. Bensinger's idea was to start developing an Audi 80 variant in co-operation with Walther Treser, Director of Pre-Development.[6]

Audi released the original Quattro to European customers in late 1980,[1] making it both the first car to feature Audi's quattro permanent four-wheel drive system (hence its name), and the first to mate four-wheel drive with a turbocharged engine.[1]

Quattro car production was 11,452 vehicles over the period 1980–1991,[1][3] and through this 11 year production span, there were no major changes in the visual design of the vehicle. For the 1983 model year, the dash was switched from an analogue instrument cluster, to a green digital liquid crystal display (LCD) electronic instrument cluster. This was later changed in 1988 to an orange LCD electronic instrument cluster. The interior was redesigned in 1984, and featured a whole new dash layout, new steering wheel design, and new centre console design, the switches around the instrument panel were also redesigned at this time. In 1985 the dash changed slightly with harder foam and lost a diagonal stripe, the dash switches were varied slightly and the diff lock pull knob gave way to a two-position turning knob with volt and oil temp digital readouts.

External styling received very little modification during its production run. Originally, the car had a flat fronted grille featuring four separate headlamp lenses, one for each of the low and high beam units. This was altered for the 1983 model year, and replaced with combined units featuring a single lens, but housing twin reflectors. This was changed again, for the 1985 model year, in what has become known as the 'facelift model' and included such alterations as a new sloping front grille, headlights, and trim and badging changes. Max speed was 124 mph.[7] The RR 20v Quattro also featured a new three spoke steering wheel design, leather covering for door arm rests, gloveboxes, centre console and door pockets. There was also a full length leather-wrapped centre console running all the way to the rear seats. 20v was also the first Ur-Q to have "quattro" script interior with partial leather seats. The floor on the drivers side had a bulge due to dual catalytic exhaust setup. The different models may be distinguished by the emblems on their boot lids: the WR had a vinyl 'quattro' decal or a brushed aluminium effect plastic emblem, the MB had chrome plated 'audi', 'audi rings' and 'quattro' emblems, whilst the RR had only chrome plated 'audi rings'.

The rear suspension was altered early on with geometry changes and removal of the rear anti-roll bar to reduce a tendency for lift-off oversteer. For the 1984 facelift, the wheel size went from 6x15-inch with 205/60-15 tyres to 8x15-inch wheels with 215/50-15 tyres. At the same time the suspension was lowered 20 mm with slightly stiffer springs for improved handling. For 1987, the Torsen centre differential was used for the first time, replacing the manual centre differential lock.[1]

Sales of the Quattro in North America began with the 1983 model year, which were constructed concurrently, and were of the same design as, the European 1982 models (they did not include the minor cosmetic changes of the European 1983 model) and continued through 1986. Total sales in the USA were 664. Canadian market received cars that were identical to the US cars with exception of the speedometer, which was metric like the early Euro cars. Official sales figures for Canada were 99, which included 61 in 1983, 17 in 1984, 18 in 1985 and 3 in 1986. Although it's believed that there might have been up to 6 cars bought in 1986.

US/Canadian cars were also equipped with larger impact bumpers with built-in shock absorbers, just like the rest of the 4000/Coupé models. None of the cars came with Anti-lock Braking System (ABS), however they were otherwise "loaded" with options, including air conditioning, and in 90% of the cars, leather upholstery. Most of the 1984 and 1985 Canadian models did not have sunroofs. The remainder of the electric, suspension and cosmetic updates took place at the same time as the European cars. Out of 99 cars imported to Canada 35 are still known to be on the road.

At the Paris Motor Show in 2010 Audi presented the quattro concept. It commemorates the 30th anniversary of the original Audi Quattro and the Audi quattro four-wheel-drive system. Based on the Audi RS5, it features a modified 2.5L five-cylinder TFSI engine and the sixth generation of quattro transmission.[8] It has been reported that Audi are considering a limited production model (200–500 cars) based on the quattro concept.[9]

Quattro - A1 and A2 evolutionsEdit

The original Audi Quattro competition car debuted in 1980, first as a development car, and then on a formal basis in the 1980 Janner Rally in Austria. Largely based on the bodyshell of the road-going Quattro models (in contrast to the forthcoming Group B cars), the engine of the original competition version produced approximately 300 bhp (224 kW/304 PS). In 1981, Michèle Mouton became the first female driver ever to win a world championship rally, piloting an Audi Quattro.[1] Over the next three years, Audi would introduce the A1 and A2 evolutions of the Quattro in response to the new Group B rules, raising power from the turbocharged inline 5-cylinder engine to around 350 bhp (261 kW/355 PS).

The Quattro A1 debuted at the WRC 1983 season opener Monte Carlo Rally, and went on to win the Swedish Rally and the Rally Portugal in the hands of Hannu Mikkola. Driven by Stig Blomqvist, Mikkola and Walter Röhrl, the A2 evolution won a total of eight world rallies; three in 1983 and five in 1984.

The Audi Sport Quattro S1 was a Quattro programme car developed for homologation for Group B rallying in 1984, and sold as a production car in limited numbers.[1] It featured an all aluminium alloy 2,133 cc (130.2 cu in) (2.1 L) 20v DOHC engine slightly smaller than that of the Audi Quattro (in order to qualify for the 3-litre engine class after the scale factor applied to turbo engines). In road-going form, the engine was capable of producing 225 kW (306 PS/302 bhp),[1] with the competition cars initially producing around 331 kW (450 PS/444 bhp).[1]

The vehicle also featured a body shell composed of carbon-kevlar[1] and boasting wider arches, wider wheels (nine inches as compared to the Ur-Quattro's optional 8-inch-wide (200 mm) wheel rim), the steeper windscreen rake of the Audi 80 (requested by the Audi Sport rally team drivers to reduce internal reflections from the dashboard for improved visibility) and, most noticeably, a 320 mm (12.6 in) shorter wheelbase.

The Audi Sport Quattro S1 E2 was introduced at the end of 1985 as an update to the Audi Sport Quattro. The car featured an inline 5-cylinder engine that displaced 2,110 cc (128.8 cu in) and produced an officially quoted figure of 350 kW (480 PS/470 bhp).[1] However, the turbocharger utilised a recirculating air system, with the aim of keeping the turbo spinning at high rpm, when the driver closed the throttle, either to back off during cornering, or on gearshifts. This allowed the engine to resume full power immediately after the resumption of full throttle, reducing turbo lag. The actual power figure was in excess of 500 bhp (373 kW/507 PS) at 8000 rpm.[1]

In addition to the improved power output, an aggressive aerodynamic kit was added that featured very distinctive wings and spoilers to the front and rear of the car to increase downforce. The weight was reduced to just 1,090 kg (2,403 lb), and the S1 could accelerate from 0-100 km/h (62 mph) in just 3.1 seconds.[1] Some of the cars were supplied with a "power-shift gearbox", a forerunner of today's DSG technology.[1]

The S1 E2 proved to be an immediate success in the rally circuit, helping Walter Röhrl[1] and Christian Geistdörfer win the 1985 San Remo Rally. A modified version of the S1E2, was also driven by Michèle Mouton.[1] The S1 evolution would become the final Group B car produced by Audi, with the works team withdrawing from the Championship following the 1986 rally in Portugal.[1]

Twenty-three years after the cancellation of Group B, the Sport Quattro S1 E2 is still widely regarded as the most powerful rally car ever fielded in international competition[citation needed], with the final factory machines of 1986 rated at 441 kW (600 PS/591 bhp).[1] In addition to Group B competition, the S1 E2 won the 1985 Pikes Peak International Hill Climb with Michèle Mouton in the driving seat, setting a world record time in the process. This victory was repeated in 1987, this time at the hands of Walter Röhrl.

A red 1983 Quattro is driven by DCI Gene Hunt (played by Philip Glenister) in the television drama Ashes to Ashes (aired on BBC1 from 2008 to 2010). Two cars were used through the run of the series, the original, and a stunt car that was acquired for series 2. Both portrayed the same car. [12] The original vehicle (also used in the Children in Need Top Gear crossover mini-episode) lacked a sunroof which was present on the car(s) used in series 2 and 3, hence a fake one was added for the sake of continuity. The stunt car was written off for the jump in series 3, episode 1 by the director of that episode and used as a parts and interior shots car until it was shot up in the finale, leaving the original intact[13]

In the run-up to the 2010 general election, a campaign poster by the incumbent Labour Party government portrayed Conservative Party and opposition leader David Cameron as Gene Hunt sitting on the bonnet of the iconic red Audi Quattro and urged voters not to allow Cameron to take Britain "back to the 1980s" by electing his party into government amid fears that it would lead to a repeat of the social unrest and unemployment that Margaret Thatcher's Conservative government of that era oversaw. The image was then adopted by the Conservatives, with the slogan "Fire up the Quattro, it's time for change",[14] with the comment 'Idea kindly donated by the Labour Party'.

This iconic car is popular with collectors and there is a Quattro Owners Club. It is believed that only 900 out of 2700 imported into the UK survive. 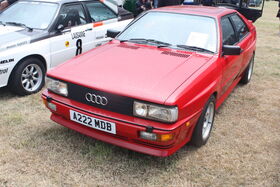 
Retrieved from "https://tractors.fandom.com/wiki/Audi_Quattro?oldid=175047"
Community content is available under CC-BY-SA unless otherwise noted.