The Allis-Chalmers Manufacturing Co. of Milwaukee, WI, USA was an American manufacturer with diverse interests, perhaps most famous for their bright orange farm tractors. The company eventually divested its manufacturing businesses and today is known as Allis-Chalmers Energy based in Houston, Texas.

Allis-Chalmers first entered the manufacturing business in the 1840s. While originally incorporated in Delaware, the company soon became a major manufacturer in the Milwaukee area after merging with two other firms. The company's presence in Milwaukee became so large that its plants were once used as a landmark there, and, in particular, its "west" plant lent its 8name to the city of West Allis, Wisconsin. Allis-Chalmers entered into the farm equipment business in 1914 at about the time of the First World War. The company would also play a major part as a manufacturer in the Second World War building pumps for uranium separation as part of the Manhattan Project and building electric motors for U.S. Navy submarines.

A series of acquisitions were made by the company beginning in 1928 with the acquisition of Monarch Tractor Company. In 1931, the company acquired Advance-Rumely based in LaPorte, Indiana. Buda Engine Co., based in Harvey, Illinois, USA was acquired in 1953. Two years later the company acquired Gleaner Harvester Co., and in 1959 it acquired the French company Vendeuvre. Allis-Chalmers also acquired Simplicity Outdoor Products, which was later sold to its management in 1983.

(Missing section 1960 to 1980s)Please add any info ! In 1952 Allis took over LaPlant Manufactures of Construction plant. The construction division formed a joint venture with Fiat Tractor Company in 1974, creating Fiat-Allis.

The company began to struggle in the 1980s in a climate of rapid economic change. It was forced amid financial struggles to sell its farm equipment division to K-H-D (Klöckner-Humboldt-Deutz) AG of Germany in 1985, the owners of Deutz-Fahr, which was renamed Deutz-Allis. Deutz-Allis later was sold to management and became what is now the AGCO Corporation (AGCO), and tractors were sold under the AGCO-Allis name - though later this became just AGCO. What remained of the manufacturing businesses were dispersed in 1998 and the company officially closed its offices in Milwaukee in January 1999 The remaining service businesses became Allis-Chalmers Energy in Houston, Texas.

Allis-Chalmers offered a complete line of agricultural machinery, from tillage and harvesting to tractors.

In 1965 Allis-Chalmers built "Big Allis" or Ravenswood No.3, the biggest generator of its time still operational today.

In 1959, a team led by Harry Ihrig built a 15 kW fuel cell tractor for Allis-Chalmers which was demonstrated across the US at state fairs. This system used potassium hydroxide as the electrolyte and compressed hydrogen and oxygen as the reactants. The original AC fuel cell tractor is currently on display at the Smithsonian Institute.

A line of 6 different sized Crawler tractors was obtained when they took over "Monarch" tractors;

Roto Baler - forerunner of today's round balers. The first model introduced in 1949. In the 1950s Allis Chalmers made a new Roto Baler called #10 Roto Baler. In this model the operator did not have to stop the tractor to allow machine to tie bale. It was equipped with an upper conveyor that would feed the hay back into the windrow. The #10 Roto baler was also equipped with a fast tie clutch. It allowed the bale to be tied in as little as 3 seconds. Later models were nicknamed white tops when the factory started painting the top canopy white. These were manufactured from 1949 to 1974.

Allis-Chalmers was a full-line manufacturer. They made implements such as manure spreaders, plows, tillage equipment, drills and planters, forage harvesters and wagons, etc... 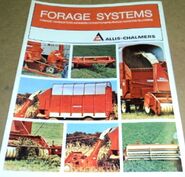 AGCO is now the parts manufacturer for everything one would need to fix up their older Allis-Chalmers tractors, including water pumps to oil filters, and even rebuild kits and tractor manuals. Many after-market suppliers offer parts for the older models.

A large number were on display at the Yorkshire Vintage Society show at Newby Hall Show 2008, (some phots are shown above). The Allis Chalmers Owners club had a display of material relating to the Marque.