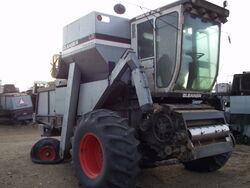 The Allis-Chalmers Gleaner L2 Combine harvester was built by Gleaner in Independence Missouri, USA, part of Allis-Chalmers. Introduced in 1977, it used either an 145 hp (108 kW) Allis-Chalmers 301 engine at 145 HP for the gear drive models or an Allis-Chalmers 426 engine at 158 HP in the hydrostatic models.Leading in sales and resale value in the USA in it's day, it was a favorite among custom harvesters. It could be equiped with a 24' grain head and an 8 row corn head. The L2, like it's predecessor the L, it used ground breaking push button electro-hydraulic controls, a stone ejection door, visual tailings, and a large capacity grain tank among numerous other convenient features.

Retrieved from "https://tractors.fandom.com/wiki/Allis-Chalmers_Gleaner_L2?oldid=149968"
Community content is available under CC-BY-SA unless otherwise noted.