This particular AWD Limited firm should not be confused with AWD Company Limited or aka AWD Of Camberley the offroad vehicle specialist. This first AWD company properly known as AWD Engineering Limited was a small specialist in Military and Offroad trucks was started in 1970 at Dunstable in Bedfordshire. This company AWD was based Bedfordshire and started then owned by David John Brown the founder of DJB/[[Artix]. AWD were also the later manufacturers and owned the trade name of the famous AWD-Multiwheeler brand based on 4X4 and 6X6 Bedford T-Series models until they closed in 1992. Soon another firm called MARSHALL-SPV of Cambridge acquired them and resumed production of their new largest allterrain models of many offroad vehicles still based on BEDFORD models.

They were later owned by the British GMC-UK group who also controlled & actually owned the old IBC Ltd (the ISUZU-BEDFORD COMPANY) factory that was producing specialized BEDFORD, COMMER, DODGE trucks and offroad vehicles, in recent times the IBC company has made the ISUZU Amigo 4X4 & ISUZU Trooper 4X4 offroad light models under several different names since 1990s for Europe, after the BEDFORD truck making business ended.

All Wheel Drive Company Limited was started as a small motor engineering firm in 1954.This AWD company was originally based in the town center of Camberley in Surrey England. They became wellknown for all wheel driven conversion specialist for goods vehicles. In the late 1960s the firm were moved to larger new premises at Bilston a small town near industrial Wolverhampton and became more commonly known by the initials AWD. They were founded by A. J. F. Andrews, a mechanical enginneer who formerly worked for Gardner, the engine specialists and also contributed work at Cheshire Engineering known for their drill-augers, holeborers and similar machinery.

This second small AWD company was manufacturing normal goods lorries for AEC, Commer FORD, LEYLAND, SEDDON but now as modified offroad going vehicles ready for many working roles mainly for the British Army, Construction, Forestry and Mining industries. Also the AWD company produced special rugged Industrial Chassis with off-road 4WD, 6WD and fewer with 8WD axles and transmissions for several British domestic manufacturers of loaders like Bray and County, several types of cranetrucks and numerous dump trucks, all of them usually fitted with one man drivers cab while others with kept their own original cab. By the 1960s their new vehicles became more popular as custombuilt 6WD and 6X4 crarecarrier specialist which were adopted and supplied to many British crane manufacturers like BHCC Iron Fairy, Priestman Brothers and Smith Of Rodley the leading domestic firms with the biggest orders. In 1962 the business was entirely acquired and was trading under the new name of VICKERS-AWD a cranecarrier manufacturer and a large engineering organization from Wiltshire until the 1970s.

The Original AWD Emblem on a Ford Thames Trader

A 1960s AWD AEC Militant 6WD for any Cranes and Excavators 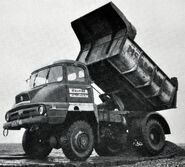 A 1970s AWD 6WD Industrial Chassis for many brands and roles

The company was formed in 1954 by Alexander John Frank Andrews and Neil Davis two mechanical experts who had bought a secondhand County 4X4 diesel farm tractor and decided to partially dismantled it to understand how their tractor mechanicals worked and how the 4WD system was made. A few weeks after, they bought a second hand Ford Thames Trader Diesel lorry and rebuilt it again but using their own new heavy duty 4WD axles based on those fitted on standard Ford Major and this new FORD THAMES TRADER 4WD was a major national success after several more were made and the brand name of AWD Co Ltd. was born. AWD CO Ltd were focused on producing Ford Trader 4X4 and 6X6 models for many purposes. Both men now as business partners they decided to focus deeper on larger models and constructed other 4WD/4X4 ,6WD/6X6 models calling them "AWD Industrial Chassis Models". These vehicles were assembled from proprietary components, though were much more than conversions and their model range included crane-carriers, crash tenders, fire engines, special lorries, loaders & farm tractors. One hugely successful AWD model was the famous AEC Matador] 6X6 cranetruck with modified version with extended chassis delivered to AEC Ltd of Southall near London for their own general evaluation of this new 6WD vehicle to be fitted with any Coles or Jones crane, something AEC had never built yet except for wartime vehicle orders.

The AWD Company Limited also assembled and distributed in Europe, the USA based manufacturer Clark-Michigan range of earthmovers, mainly 4X4 loaders after 1961. Later in 1962 AJF Andrews left AWD of the UK and he joined the Northamerican giant Clark-Michigan company. Soon another major English firm called Vickers, bought AWD CO LTD and they took over its lorry conversion business which was quickly renamed Vickers-AWD Limited. The new firm moved again from Camberley in Surrey to South Marston near Swindon in Wiltshire where a much larger factory was engaged in offroad vehicles assembling/rebuilding until it was bought by Jones Cranes Limited for making their own cranecarriers and mobilecranes of all types.

AEC were already one of the earliest but few UK truckmakes to include at least a 4X4 model in their range so they were quite impressed at the Southall factory and showed an almost imediate interest in this AWD Prototype One that was to reappear later on as a new model called AEC-AWD 6WD cranecarrier one of them built is shown here.Except for Leyland, Foden and Scammell most of the other major UK lorry manufactures were not geared up to supply customers and takers with low volume or one-off models so AWD Co Ltd quickly gained orders to supply them with these AWD go anywhere specials. By 1960 they had built a 1000 machines and more than 1300 by 1961. The AEC Millitant chassis was converted for use as a mobile excavator by Blaw-Knox and a mobilecrane was made by Jones Cranes using a new AWD-Foden 6x6 cranecarrier both of these as an order from the MOD. Leeds based crane-truck maker called Smith Rodley made several 6x6 models on AWD-Leyland Hippos chassis. The Ford Thames Trader a much longer version of the standard Ford Thames was also converted to be used as a offroad dumptruck that sold reasonably well while this classic lorry remained available.

Later by the early 1960s Jones Cranes Limited of Letchworth started a close and friendly mechanical engineering business with AWD Co Ltd who agreed to manufacture and supply some offroad & roadgoing Jones crane and mobilecrane models with brandnew 6X6 cranecarriers already built with one-man cab on the left or right corner at the front and both companies have worked together closely ever since. This became an instant success for both manufacturers and Jones were quickly one of their biggest if not the largest customer for AWD Co Ltd while Jones Cranes enjoyed tremendous cranes sales at the time. After 1963 the whole business and production rights was then reorganized and resumed by another British major important and independent mechanical engineering larger firm called Vickers Limited ( NOT the UK Bulldozer and Tractor firm of the same name ) in 1962 who was then later renamed as Vickers All Wheel Drive Limited or Vickers AWD Ltd for short who were from Bilston near Wolverhampton then moving to South Marston in Wiltshire where they were making hydraulic cranecarriers and modern cranetrucks often with Jones Cranes to assist them, some of their bestselling and famous models were the 1970s Vickers-AWD V531 Iron Fairy Amethyst and the Vickers-AWD V531 Iron Fairy Zircon 6X6 twinsteer telescopic hydraulic cranetrucks. Around 1968 the company restarted manufacturing selected AWD-Jones, BHCC Iron Fairy, Priestman Brothers and Smiths of Rodley large and medium sized cranecarrier modes all powered with the latest TD mechanicals & modern hydraulics too for their new heavy vehicles featuring automatic or manual transmissions with almost any diesel engine could be ordered, with telescopic hydraulic jibs & stabilizers, some cranecarriers even included 6WD and 8WD chassis, others had larger oneman cabs while others were Jones truckcranes under the name of Vickers-AWD V-500 Series cranecarriers although some versions carried a low version of the famous British Motor Panels two men cab.

However Vickers-AWD was later acquired by the independent The Group 600 also known as The George Cohen & Sons Company Limited empire based near Leeds and London in 1971 who already owned the giant Jones Cranes Ltd crane engineering operation and other crane makers. Henceforth the firm VICKERS-AWD were now redesignated as Crane Travellers Limited and kept production under a new management and stopped making the general purpose go-anywhere offroad vehicles, concentrating itself as a major hydraulic general crane firm using the brandname of Vickers-AWD for cranecarriers modified by Jones Cranes Ltd themselves by adding a few technical updates and upgrading the entire cranetruck range gradually improving the cranetruck manufacturing and were now renamed AWD-JONES Series in the 1970s. Every new cranecarrier model being produced from now on bore the names JONES CRANES but no longer the designations AWD or Vickers-AWD while Crane Travellers Limited became a division & subsidiary for Jones Cranes Limited in 1977.

Contracts and Orders from Outside Manufacturers and Conversions

Some of these cranetrucks are still under constant use in parts of the UK, Malta, Australia and other Commonwealth countries and are now used as we speak for numerous tasks mainly in and around Malta and UK too can be found and seen at old Classic And Vintage shows and International motor vehicle shows and are a common site sometimes at Classic Machinery shows that often happen now and then. Also in the UK some are on display at Museums and still work after all these years and maintained by caring mechanics and enthusiasts. On some Steam Railway Museums and British Rail Museums several are shown working or on display and well kept for mechanical purposes and studies.