Alfa Romeo Automobiles S.p.A. is an Italian Car manufacturer founded on June 24, 1910 in Milan.[2] Alfa Romeo has been a part of the Fiat Group since 1986,[3] and since February 2007 a part of Fiat Group Automobiles S.p.A. The company was owned by Italian state holding company Istituto per la Ricostruzione Industriale (I.R.I.) between the end of 1932 to 1986. The company was originally known as A.L.F.A., which is an acronym for Anonima Lombarda Fabbrica Automobili.

In 1930 Alfa Romeo presented a light truck in addition to heavy LCVs based to Büssing constructions.[4] In the Second World War Alfa Romeo also built trucks for the Italian army ("35 tons anywhere") and later also for the German Wehrmacht. After the war, commercial motor vehicle production was resumed. In co-operation with FIAT and Saviem starting in the 1960s different light truck models were developed. The production of heavy LCVs was terminated in 1967. 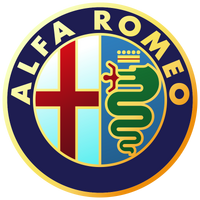 Cite error: <ref> tags exist, but no <references/> tag was found
Retrieved from "https://tractors.fandom.com/wiki/Alfa_Romeo?oldid=221824"
Community content is available under CC-BY-SA unless otherwise noted.