The Enviro400 was designed by TransBus International until its collapse and reformation as Alexander Dennis. The Enviro400, like the other products in the Enviro range, is an integral, but the body is also available on the Volvo B7TL/B9TL and Scania N230UD chassis for sale in the UK market. The Enviro400 chassis can also be built with body by other manufacturers.

The Enviro400 featured an innovative seating layout that maximized use of seating space on the lower deck by placing 2 forward-facing moulded seats onto the front nearside wheelarch box with a small luggage shelf on the rear-half, and also a single forward-facing moulded seat on the front off-side wheelarch hub between the driver's partition and the staircase. The offside seat is not popular due to a lack of leg- and head-room with the driver's partition immediately in front and the stairs immediately above and behind the seat, and only a small side-window giving it a claustrophobic feel. This feature is not included on Enviro400 with spiral staircase, but is standard on straight staircase variant.

London operator Metroline was the first company to order the Enviro400, with the first of 28 entering service in January 2006. One dual door demonstrator, named "Spirit of London", was delivered to Stagecoach London to replace the Dennis Trident destroyed during 7 July 2005 London bombings [1] and a single door demonstrator was delivered to the then Travel West Midlands (now National Express West Midlands) for evaluation. Both prototypes were exhibited at "Coach & Bus Live 2005" in the National Exhibition Centre in Birmingham, UK and then entered service in January 2006. Metroline, National Express West Midlands and the Stagecoach Group were large customers of the Dennis Trident.

The Enviro400 had sold well in London with a number of operators, such as Travel London (now known as Abellio London) and London Genera] (which received the first Euro IV-engined Enviro400 in May 2006), operating these buses. It is also popular with Stagecoach, who placed its first order of 130 low-height models in February 2006, later followed by another 389 buses with Euro IV/V engine. Arriva also received Enviro400s for their UK operations, Arriva Merseyside relaunched their Wirral - Liverpool 'Cross River' services with a batch of 23 in January 2009, and a further batch of 12 were introduced to Arriva Merseyside's cross-Liverpool service 60 linking Bootle with Aigburth in September 2009.

In 2009, Kowloon Motor Bus and Citybus of Hong Kong received two (one for each operator) air-conditioned Enviro400 for evaluation, both of them entered service in February 2010. Citybus introduced one more in July 2010. In November 2010, Alexander Dennis had confirmed an extra order of 38 Enviro400s from Citybus at press conference of Euro Bus Expo 2010 held in Birmingham, UK. MTR Corporation also ordered 9 Enviro400s for MTR Bus service.

Besides, one example was built for use in the 2008 Summer Olympics.

On 13 October 2006, Solent Blue Line received a Volvo B7TL/Enviro400 meeting the Euro III emission standard, with the interior in Wilts & Dorset livery. This remains a one-off as all subsequent Enviro400s on Volvo chassis were built on the B9TL chassis. An Arriva demonstrator was shown at Euro Bus Expo in 2006 to the latter standard.

Irish state run operator Dublin Bus was the first bus operator to order the Volvo B9TL-based Enviro400, it ordered 50 with the first of these entered service on 14 August 2007, later followed by another 50. In the UK, East Yorkshire Motor Services took delivery of 5 Enviro400-bodied Volvo B9TL in December 2007, which entered service in January 2008. London General also received 3 Enviro400-bodied Volvo B9TLs in October 2008, which are being evaluated against integral Enviro400s and Wright Eclipse Gemini-bodied Volvo B7TL/B9TLs that are extensively featured in Go-Ahead's London Central/General fleets. 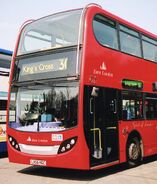 The front of "Spirit of London", now owned by Stagecoach London. The name is on the side by the doors. This bus has been renumbered from 18500 to 19000 to follow the rest of the Enviros and moved to West Ham bus garage. 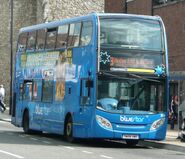 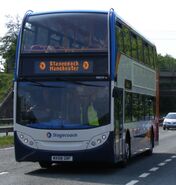 A new Alexander Dennis Enviro400 on its maiden run with Stagecoach Manchester.